When, years ago, I was eagerly trying to communicate to someone just why I loved The Ladykillers so much I said the following: "imagine if the Reservoir Dogs were stuck in a house with a little old lady and they kept trying to get her out of their way, but failing." Now, that was perhaps a silly and flippant way to describe it, but I was trying to do two things. First, I was trying to describe the plot in one sentence while highlighting what a brilliant blend it was. Second, I was trying to show how truly timeless it was. I may have failed to do either of those things, but at least I tried.

The great Alec Guinness gets, arguably, his best ever role as Professor Marcus, a criminal mastermind with a new scheme that seems so stupid it could be a stroke of genius. He rents a room in the household of kindly Mrs. Wilberforce (Katie Johnson) and then invites his gang along to join him, only they're masquerading as a musical quintet. Cecil Parker, Herbert Lom, Peter Sellers and Danny Green play his cohorts and not one of them puts a foot wrong. Unbeknownst to Mrs. Wilberforce, she is crucial to the whole plan. Will everything go smoothly? Well, that wouldn't be any fun now, would it?

It's hard for me to know where to begin in my praise for The Ladykillers. I want to mention every actor, every scene and every great line of dialogue, but I don't want to be some rambling bore (for anyone who rolled their eyes and thought that I'd already made that my specialty . . . . . . . . how dare you). For the sake of brevity, let's just assume that I've already heaped enough praise upon Guinness,  Johnson, Parker, Lom, Sellers, Green, Jack Warner (who plays a superintendent), Philip Stainton (who plays the sergeant) and Kenneth Connor and Frankie Howerd, who both have small, but memorable, roles. And let's assume that I mentioned the many wonderful scenes and the many wonderful exchanges in the script and then repeated myself for hours on end. There. I think that should do it.

The screenplay by William Rose really zips along from start to finish and the direction by Alexander Mackendrick takes each separate element and puts them together perfectly, but it's the cast that makes the movie the timeless classic that it is. If you don't believe me then just watch the remake by the Coen brothers. Actually, don't. I'd never forgive myself for recommending it to anyone, even as a joke.

People who know my taste know that I enjoy movies across a very, VERY broad spectrum, but watching a film like The Ladykillers serves as a wonderful reminder of why I have, and always hope to have, a passion for film. It's easy to pick a number of worthy films that people should see and enjoy for a variety of reasons (technical accomplishments, acting prowess, etc. etc.), but it's also just as easy to pick a number of films that people should see just to be provided with flawless entertainment from start to finish. Films like this one.

If you haven't seen it yet then rectify that oversight ASAP. 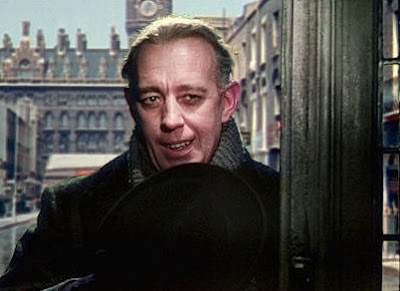