The first of the American Pie franchise instalments to go straight to video, this is an offshoot from the original trio that moves the focus away from the gang that audiences got to know and love and puts the character of . . . . . . . . Matt Stifler (Steve Stifler's younger brother, played here by Tad Hilgenbrink) front and centre. It's a shift of focus that doesn't bode well, and as the film goes on things start to get worse and worse.

The plot is as follows: Matt Stifler is a complete douchebag (not my opinion, he IS a complete douchebag . . . . . . imagine Steve Stifler with absolutely no minor moments of likeability whatsoever) and when he decides to play a mean-spirited prank on the school band he is punished by being made to spend his Summer holiday at band camp. This gives him a chance to secretly record some of the girls getting nekkid, or so he hopes, and it also keeps him in close proximity to the lovely Elyse (Arielle Kebbel).

Almost everything that you loved about the first three American Pie movies is absent here. First of all, this cast just doesn't have the appeal and/or charisma that the lads from the previous movies had. Tad Hilgenbrink is terrible in the lead role, but he's not helped by a script (written by Brad Riddell) that fails to do enough to offset his moments of major douchebaggery. Kebbel is actually quite likeable, and Eugene Levy and Chris Owen carry some goodwill along with them, but only because we know their characters from the previous movies. Ginger Lynn has an amusing role and Omar Benson Miller is easy to warm to, but those two have minor supporting roles. The folk with more screentime, such as Jason Earles, Crystle Lightning, Matt Barr and Lauren C. Mayhew, are all either unmemorable or unpleasant.

If director Steve Rash tried to overcome that problem by throwing in more laughs or even, let's be honest here, more gratuitous nudity to please the target demographic then maybe the film would rise up to a level of average. Sadly, he doesn't even think to do that. The movie is one big tease, which is fine for a film that wants to be subtle or sophisticated while chalking up the gags. It's not fine for a film that has the words American Pie in the title.

So, we have no laughs (well, only a few, at a push), no characters worth rooting for, a low-budget version of the soundtracks used in the first three American Pie movies and even a lack of any nudity that teenage males should enjoy - although the unrated version runs about 3 minutes longer and at least panders to that base requirement. 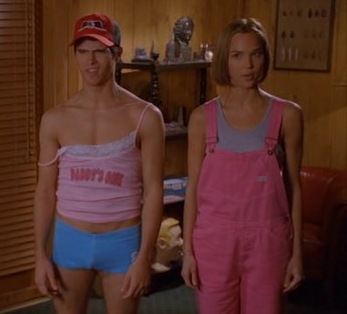