While it must be said that Death Proof is much better as part of the Grindhouse experience, where it appears in a truncated form, revisiting the movie wasn't as painful as I had anticipated. It remains the weakest film from writer-director Quentin Tarantino, to date, but it's also full of many delights for fans of this kind of entertaining "trash".

The plot is actually very slight. The movie follows two different groups of girls and shows what happens when they run into a very dangerous driver known as Stuntman Mike (Kurt Russell, the highlight of the film). That's really all there is to it, with this plot providing Tarantino with the excuse he needs to set up some automotive carnage in the first half and a quite superb car chase during the grand finale.

The biggest problem that Death Proof has is the cast in the first half of the movie. Tarantino fills the film with his usual dialogue, but it's coming out of the mouths of young women who just aren't convincing as people who would be experienced and/or cool enough to have such tastes and conversations. Jordan Ladd, Vanessa Ferlito and Sydney Poitier may be lovely young women, but they're practically children compared to the characters normally delivering Tarantino soundbites. Rose McGowan is a saving grace, as is a lapdance sequence and a couple of choice music selections, but the rest of the first half is one big wasted opportunity when not putting Kurt Russell front and centre. Thankfully, things pick up enormously when the second group appears. Mary Elizabeth Winstead may play someone young and naive, but Rosario Dawson, Tracie Thoms and Zoe Bell all feel like adults with some experience of adult life.

The second-biggest problem that Death Proof has ties in with the first, it's the way in which Tarantino seems to be indulging himself. Of course, it could be argued that his best movies have stemmed from an urge to indulge himself, but this just takes it that bit further. The pacing is painfully slow at times, speeches serve little purpose except allowing the writer-director to relish his own dialogue and the casting is hit and miss because one or two people seem to be there for reasons other than their actual ability to act.

These problems, however, CAN be temporarily forgotten whenever Kurt Russell is reminding viewers of just how great he can be at becoming a full character or when cars are speeding along on tarmac. The finale of the movie keeps these two elements onscreen for an all-out, tyre-screeching, fender-bending car chase that feels like it could have come straight from the 1970s. Which means that the film is a partial success.

It still won't necessarily win you over entirely, but Death Proof is certainly a film worth revisiting at least once. Those car scenes, the pretty flawless soundtrack, some enjoyable dialogue exchanges and another top drawer performance from the one and only Mr. Russell end up ensuring that there's at least something to enjoy during its runtime. 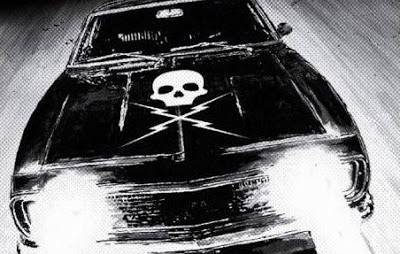