You may wonder just what could appeal to anyone above the age of 15 in a movie about two dim-witted metalheads who need to travel through time in a telephone box to improve their chances of presenting a very important history report. It's a fair query, but it's also one that has a fair answer.

There's no denying that Bill & Ted's Excellent Adventure is mainly a teen film, but the main characters are so naive and sweet that nothing about the movie really feels as if it's a film JUST showing how cool young things go through their daily lives. It's a film, like many others, about believing in yourself. It's a film about friendship. And it's a film about being excellent to each other. Which, let's face it, isn't the worst message for a teen film to contain.

Alex Winter is Bill S. Preston, Esq. and Keanu Reeves is Ted Theodore Logan. The two young men don't know it, but they will be a pretty big deal in the future. However, that will only happen if they pass that important history assignment, a moment in their lives that is so crucial that a man named Rufus (George Carlin) is sent back in a time-travelling telephone box to hand it over to them and give them the best chance of making everything right for a future generation. Bill and Ted decide that the best thing they can do is actually pick up a few historical figures in order to impress their teacher (Bernie Casey), and to also maybe fall for a couple of princesses (played by the lovely Diane Franklin and Kimberley LaBelle).

Bill & Ted's Excellent Adventure benefits from a surprisingly witty script from Chris Matheson and Ed Solomon (it may be daft, but it's far from all daft and the time-travel trickery is enjoyably realised), good direction from Stephen Herek that makes the most of the material and resources available and, perhaps most of all, spirited performances from the leads and everyone else involved. Terry Camilleri, Dan Shor, Tony Steedman, Rod Loomis, Al Leong, Robert V. Barron, Clifford David and Jane Wiedlin (as in Jane "Rush Hour" Wiedlin) have fun as they pretend to be, respectively, Napoleon, Billy The Kid, Socrates, Sigmund Freud, Genghis Khan, Abraham Lincoln, Ludwig van Beethoven and Joan Of Arc. Carlin is great as Rufus and Amy Stock-Poynton provides some amusement as the young lady who was once at school with Bill and Ted, but is now Bill's stepmother.

Maybe I am desperately trying to cling on to my last shred of youthful spirit so my opinion should be taken with a pinch of salt, but I think this movie still works well with anyone who still has an urge to turn up the volume when a favourite rock song comes on. The fact that it encourages a responsible mix of partying and learning, because learning is shown here as a GOOD thing, probably upsets as many people as it pleases. Which I just view as another aspect of the film that is most excellent. 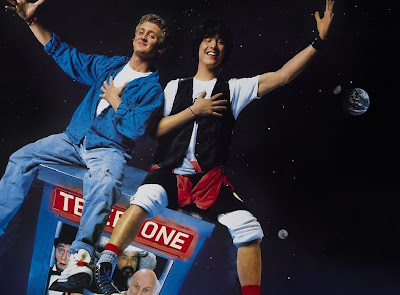