Oh, how embarrassing it is when the chance comes along to finally view a movie recommended by many, many others over the years and it turns out to be an easy favourite because, guess what, everyone has been recommending it with good reason. Kind Hearts And Coronets is that film for today and I am that person who put off viewing this masterpiece for far too long. Shame on me.

Dennis Price stars as Louis Mazzini, the child of a woman who was deemed by her family to have married beneath her. Due to the judgment made by the rest of the family, Louis and his mother are left to make their own way in life and when his mother dies with no display of remorse or warmth from her estranged family, Louis decides to take matters into his own hands. He sets out to take his rightful place in the family tree and to pull himself up to the higher strata of society. This will involve killing every one of his main relatives (all played by Alec Guinness) until he is left, the sole heir to the family fortune and title.

I'd heard SO much about Kind Hearts And Coronets over the years that I must admit to being a little worried when I didn't love it from the very opening second. People had praised it sky high and I may have been expecting too much.

Within minutes I was relishing each and every perfectly formed line of dialogue (written for the screen by director Robert Hamer and John Dighton, from the book by Roy Horniman) and dying to find out just what would happen to each character populating the movie.

Dennis Price is superb in the lead role and he's able to play off two very different women, one being the ambitious and manipulative Sibella Holland, played by Joan Greenwood, and the other being the beautiful and gracious Edith D'Ascoyne, played by Valerie Hobson. Audrey Fildes, Clive Morton, Miles Malleson and John Penrose all do fine work in their roles, small or large, but everyone on-screen plays second fiddle to the versatile and hilarious Alec Guinness. Whether he's playing an arrogant cad, a priest with a love for an occasional tipple or even a female heavily involved in the suffragette movement, Guinness is never less than absolutely brilliant.

Hamer, in his directorial role, keeps everything mixed just perfectly. Most importantly, he manages to keep the black comedy throughout without it ever feeling too mean-spirited or just downright grim. This is helped by the casting - despite Guinness doing such sterling work, let's not deny how likable Price is in the lead role - but it's really the result of every single component being put together perfectly.

If you haven't seen Kind Hearts And Coronets then reschedule whatever you had planned and watch it right now. Don't make the same mistake of leaving it as long as I did. 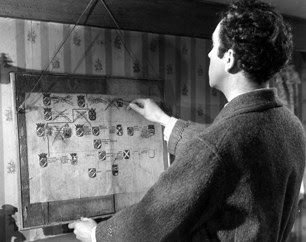