There's Nothing Out There is a film that a lot of people like to put forward as a major influence on the Scream movies. Although there were other movies that came along beforehand that would mock and/or play with the rules of the horror genre, it's hard to deny that There's Nothing Out There seems to have been a big influence on the post-modernism of Scream (which, let's not forget, followed on from some ideas also rooted in the fantastic New Nightmare).

A bunch of people go to spend some time in a cabin in the middle of the woods. Unfortunately, they are there at the same time as a carnivorous alien beastie. Fortunately, they also have one amongst their number (Mike, played by Craig Peck) who seems to have watched every horror movie ever made and knows how to maximise their chances of survival.

The big difference between There's Nothing Out There and Scream is the fact that the former actually points out the genre conventions while also revelling in throwing them around onscreen. They may also be subverted at times, but this is a film that mentions gratuitous nudity before actually adding plenty to the mix. The low budget means that the special effects and gore gags lack any real impact, but there's charm to spare in every major sequence.

The script and direction by Kanefsky, like everything else, is a bit clumsy and glaringly amateurish in places, as is the acting. That actually doesn't ruin the film though. Everything becomes quite endearing in the way that it all keeps doing whatever needs to be done in an attempt to entertain from start to finish.

Craig Peck may have the best role, but he's not carrying the film. That responsibility is shared by many others, among them Wendy Bednarz, Mark Collver, Bonnie Bowers, John Carhart III, Claudia Flores and Jeff Dachis. With the greatest of respect to the entire cast, I don't think that anyone went on to do anything else MAJOR in the film industry, but they can look back on this movie and be happy enough with the final result.

Don't expect anything polished or completely professional when you get around to seeing There's Nothing Out There and you may find it as amusing and surprisingly charming as I did.

And it's also available to watch, all free and legal, here on the fantastic Troma channel on YouTube - http://www.youtube.com/watch?v=jHUFU2gU35I 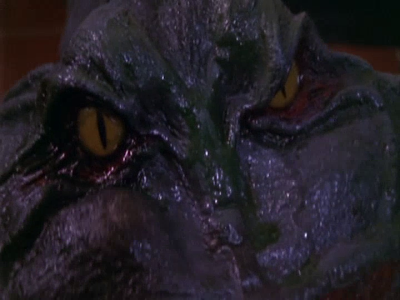