Despite one or two titles that I couldn't get a hold of, this is the last stop on the big tour of Kurt Russell's filmography, those checking over his IMDb listing and wondering why I haven't covered Cutlass should know that it's a short film so I didn't include it here.
I did, however, INCLUDE it here (as it's available on YouTube) so enjoy.


Touchback is a typical, sentimental sports drama. Mix a bit of Field Of Dreams with It's A Wonderful Life with any number of American Football movies and you'll get this.

Brian Presley plays Scott Murphy, a broken man thanks to a sports injury from his youth. He has a lot to be thankful for in life, including his wife (Macy, played by Melanie Lynskey), but it's hard to see those through the haze of regret and frustration. It's especially hard for him when he sees former team-mate Hall (Marc Blucas) doing so well and in a relationship with Jenny (Sarah Wright), who used to be Scott's girlfriend in high school. After a particularly bad day, Scott sits in his truck and considers just what he has left to live for. He thinks back to high school and the most important game of his life, but is it just a dream or is something very strange allowing history to be changed, if Scott chooses to change it.

Ticking every single box that you expect to be ticked, and with no surprises whatsoever, Touchback shouldn't really be as enjoyable and moving as it is. Maybe I'm just getting soft in my old age. Or maybe it's just so easy to identify with. It's not really all about football, it's about those choices that we all make to set us on different paths. Consciously or not, we make numerous decisions every day that lead us to exactly where we are in the here and now. I often tell my wife, and I apologise for anyone feeling nauseous after reading this, that I don't mind all of the mistakes I made in my life because they piled up and led, ultimately, to our meeting and developing a relationship. How can I want to change anything that could then undo such a good result?

Writer-director Don Handfield does everything exactly as you'd expect. There's some humour here and there, but the focus is more on the prospect of seriously changing a whole life than any Back To The Future style shenanigans. There's plenty of manipulation, most of which I admit I fell for. Hey, it's effective and affecting by the time it all builds towards the big finale.

The cast all do a decent job, though nobody excels (except, perhaps, Kurt Russell in a wonderful supporting role - maybe he should play every team coach ever). Brian Presley is strangely absent in the lead role, but Melanie Lynskey puts in a much better performance. Marc Blucas and Sarah Wright are perfectly fine in standard jock and cheerleader roles, respectively, and Kevin Covais joins in with some of the more fun moments as Todd White, a young, non-sporty man once bullied by Scott who now finds himself being befriended by the guy. And Christine Lahti also does well with her limited screentime, playing a mother who may not get along to watch her son in action on the football field, but who is always very proud of him.

The pacing, the dialogue, the shot choices, it's all by-the-numbers stuff. But that doesn't mean that it's bad, it's just never great. 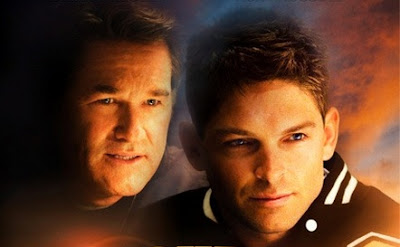