Lady In The Water is, in so many ways, a film that is hard to take in while watching. It's so ridiculous, so self-indulgent and so messy that it's mesmerising in that way that bad cinema can be. The easy joy of mocking the film is tinged with a slight sadness that some aspects (some of the cast, the production design) are good. The biggest problem with the film is writer-director-star M. Night Shyamalan, who decided to crash and burn in a display of arrogance that should never have been indulged.

Bryce Dallas Howard plays the titular character, named Story, encountered one evening by an apartment building superintendent, Cleveland Heep, played by Paul Giamatti. She is in danger and needs to get home, but she also has something very important to tell at least one of the tenants living in the building. One man in particular, played by M. Night Shyamalan, may be the most important person among them. He may be the man destined to write a story that will change the world.

Yes, that's correct. M. Night Shyamalan wrote and directed a movie in which someone is destined to write one of the most important works of the 21st century, and decided that he would be the best person to put in that role. Never mind the fact that he has a supporting cast that includes Bob Balaban, Jared Harris, Jeffrey Wright, Freddy Rodriguez and other contenders. It's all down to him. I didn't mention the actresses - Cindy Cheung, Sarita Choudhury, Mary Beth Hurt, etc. - because, sadly, they are all stuck in roles that are either purely expositional or just support for the men all jostling for position as the best person to help Story. At least, that's how it seemed to me.

Created as a modern fairytale, the movie actually works, almost, when fully committing to that approach. There are fantastical creatures (both good and bad), there is an opening narration, there are some nice, magical touches here and there. Unfortunately, everything else is designed to make the whole thing seem up to date and cool, which has the exact opposite effect.

The cast, for the most part, do well with what they're given. The weakest person onscreen is, you guessed it, M. Night Shyamalan. He'd already proven why he developed a career behind the camera as opposed to in front of it with cameo roles in his earlier movies, but he suddenly believes that he's a worthwhile addition to a pretty solid ensemble cast. No. No, he isn't.

I could say more about the movie. There are more small things worth praising and more minor criticisms that could be written here, but the shadow of Shyamalan's ego blocks out everything else. Giving more time over to the movie almost feels like giving too much attention to a toddler having a major shit fit in the middle of a supermarket. The movie came out, it was suitably chastised and now we should all just move along and stop staring. 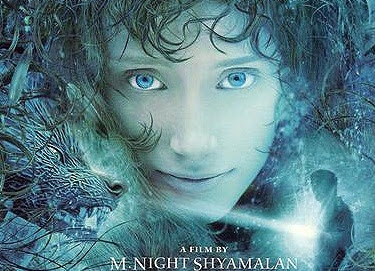