Layer Cake is an important movie for a number of reasons. Firstly, it's the film that saw the hugely talented Matthew Vaughn step out from the shadow of Guy Ritchie (he'd previously been producer on Ritchie's movies). Secondly, it showed Daniel Craig's leading man potential and even, yes, gives him a Bond moment. Third, it showed that British crime movies could still be fresh and entertaining without coming across as some pale Lock, Stock-wannabe. Fourth . . . . okay, I'm not sure if there are any more reasons so I'll stop there. But Layer Cake is certainly more, thanks to what it achieved, than just another UK gangster movie.

The story revolves all around Daniel Craig's smart drug dealer, a man who wants to make his million and get out of the business. Of course, anyone who makes the big shots a lot of money will always struggle to extricate themselves from the criminal lifestyle and that's exactly the case here. Avoiding the police, trying to stay alive and setting up a deal involving a million stolen pills, Craig really has his work cut out for him.

Mixing a smart script with great performances (Craig is superb but he's more than capably supported by the likes of Kenneth Cranham, Colm Meaney, Michael Gambon and everyone else who appears alongside him), cool visuals and an ideal soundtrack this film may not cover any new ground but it gives everything a fresh coat of paint with it's easygoing, effortless air of . . . . cool. This film has style in abundance. That's not to say that it glorifies the lifestyles shown or any of the violence we see, hell no. There are people here we'd never want to meet in real life and when things erupt into violence they do so with absolute brutality, impacting on the lives of those involved. There are no consequence-free, thoughtless actions here. Everything is weighed up and accounted for, even if it's after the fact.

It's an absolute corker of a film that has grown on me with each subsequent viewing. I'm sure that many others will still simply cast it aside as "yet another British gangster flick" but that's not the case and I hope that others give it a chance and end up enjoying it as much as I do. 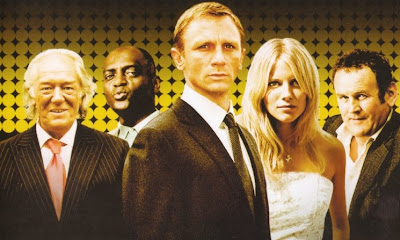