A remake of the much-loved 1981 movie, this time around drunken, childish Arthur is played by Russell Brand, Hobson is played by Helen Mirren and the love interest has become Naomi (played by Greta Gerwig). Luis Guzman is the chauffeur, Jennifer Garner is Susan Johnson and Nick Nolte is her scary father.
A quick reminder of the plot. Arthur is a drunk but a very, VERY rich drunk so that’s fine. The fact that he’s always in the news isn’t so fine and so his mother (played by Geraldine James) tells him that he must marry Susan Johnson or be cut off from the money. This happens, annoyingly enough, just as he meets and falls for the lovely Naomi.

Written by Peter Baynham (with plenty of lines and spirit, pun intended, lifted from the original) and directed by Jason Winer, Arthur could have been something really enjoyable. Russell Brand can do an eccentric drunk in his sleep so everything else should have fallen into place, right? Wrong. For some reason it was decided to make Arthur less of a staggering drunkard (though he’s drunk a lot of the time) and more of an outright man-child in this version, meaning that we have to suffer through an appalling performance from Brand that has him putting on a very childish voice and acting just like someone who’s been doped up with drugs. I’m sure this choice was made so that the film wouldn’t be seen to be deriving fun from alcoholism in these PC-infested times but it’s a bad choice and throws off the whole film.

Everyone else is good and that’s a great shame because it simply highlights the poor performance from Brand, someone who I have so far always enjoyed in movie roles. Mirren makes a more than adequate replacement for John Gielgud and the bond between Arthur and Hobson is more obvious and easier to understand this time around. Gerwig does just fine as Naomi and Garner certainly does well as Susan Johnson, who is a colder and more calculating character in the remake than she was in either of the 80s movies. Guzman is very funny and Nolte is believably fear-inducing.

There are individual moments of fun, and a nice selection of movie cars, and the main character eventually gains your sympathy as the movie winds towards a predictable finale but this is inferior to the original and inferior to many other comedies released this year. 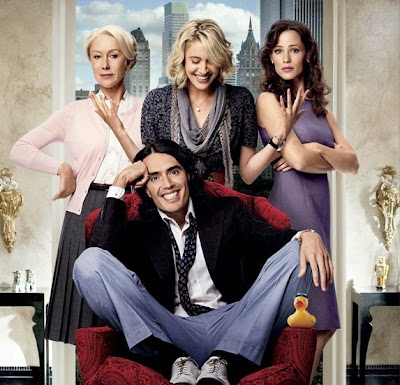