David Cronenberg followed up the magnificent A History Of Violence by reteaming with leading man Viggo Mortensen and creating something that works as both a companion piece and also a flipside to their preceding movie. A here and now of violence, if you will.

Events are set in motion by a young girl who gives birth to a child, but dies in the process. Naomi Watts plays a nurse named Anna, present at the birth and worried about the future of the newborn child. She takes a diary that belonged to the deceased girl, finds out that it's in Russian and sets out to get it translated, in an effort to find a family for the baby. Unfortunately, in her attempt to do a good deed she finds herself mixing with some bad people. Bad Russian gangster types. The big boss is Semyon (Armin Mueller-Stahl), messy situations are created by his son, Kirill (Vincent Cassel), and everything gets cleaned up by Nikolai (Viggo Mortensen), who constantly refers to him as just a driver. As Anna gets more involved with these people she puts herself, and others, in a very dangerous situation.

Unhurried, unfussy and completely unglamorous, Eastern Promises is a typically cool look at some unpleasantness by Cronenberg, working from a fantastic script by Steven Knight. Set in London, he matches his usual style with the great cinematography by Peter Suschitzky with outstanding results. London isn't the collection of buildings scattered around Big Ben and Notting Hill that it so often is in other movies. It's simply a big city, a place full of areas and buildings that you could pass by every day without a suspicion of what has gone on there.

But it's the acting that really lifts this up to a fantastic viewing experience. Naomi Watts is very good in her role, believably strong in her eagerness to do the right thing while also visibly unnerved. Armin Mueller-Stahl is great as the typical, cold gangster boss and Vincent Cassel is always entertaining as Kirill, the son who can never seem to do any right for doing wrong. The film belongs to Viggo Mortensen, however, and his performance is almost perfect. Okay, there may be problems with the accent to those who have a better ear than I do, but it's not too bad. Not too bad at all. His dialogue is also backed up by a physical performance arguably better than the one he delivered in A History Of Violence. Able support also comes from Sinead Cusack, Jerzy Skolimowski and even Tamer Hassan, in a small role that still allows him to feature in the most memorable sequence in the entire film.

Although the movie has quite a few moments of violence in it, none of them are flippant, "easy" movie deaths. This is a film about every bloodletting sending a message, about every body telling a story (be it through tattoos or fatal wounds) and about how much some people will risk in order to make a difference for the better. It's all that, PLUS it's a fantastic gangster movie AND it has one of the best and boldest fight scenes set in a bathhouse since . . . . . . . . . . . well, since ever. 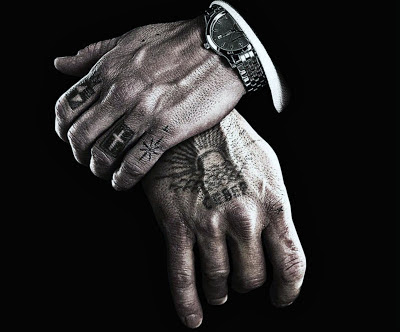