I loved Quatermass And The Pit when I saw it as a young lad, when it really creeped me out, and I still love it today. It remains one of my favourite Hammer movies and a jewel in the company's crown, as far as I'm concerned.

Things start getting a bit strange when a mysterious object is revealed while workmen dig up parts of a London underground station. At first thought to be an unexploded WWII missile, it soon becomes apparent that the object is something far more mysterious . . . . and possibly far more dangerous. Luckily, Professor Bernard Quatermass (played with great gusto by Andrew Keir) is on hand to put forward a theory or two involving scientific explanations of events that seem far removed from our realm of understanding.

Helped by a fantastic cast of folk who may not have had GREAT fame, but who were all very good in their roles (James Donald and Barbara Shelley are particularly good, while the likes of Julian Glover and Duncan Lamont and Bryan Marshall all do great work in smaller roles), this movie retains such an impact and ability to impress thanks largely to the writing of Nigel Kneale.

Roy Ward Baker does just fine in the director's chair, but any drama we see is always small-scale stuff even while it's hinting at a larger "shockwave". So it's up to our own suspension of disbelief and imaginations to fill in the details just at the very edges of such a broad canvas and, because of the tone and grounding of it all by Kneale, this is easily done. The story unfolds like a standard mystery tale with things seeming very implausible at the beginning and then slowly becoming more and more believable as viewers are drawn into the world and also offered some genuinely interesting scientific theories/background on the situation.

A fantastic TV series turned into a fantastic movie. 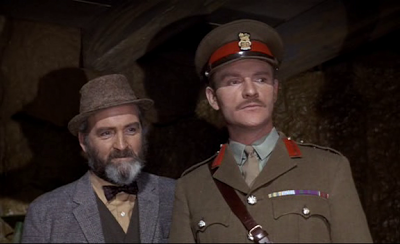