There's a killer (Eric Peter-Kaiser) who attacks families during lightning storms and, guess what, he spends time hiding in the basement until the conditions are just right. His name is Jack. Hence the title of the movie: Basement Jack. He's been doing the same thing for years now and there's one girl he wants to catch up with, one potential victim who escaped his clutches. That girl is Karen Cook (Michele Morrow) and she is determined to do all she can to help the police catch the sick murderer. But what creates and motivates such an individual? Flashbacks showing his treatment at the hands of a very cruel mother (Lynn Lowry) provide the answer.

Basement Jack isn't a great movie, but there are a couple of famous horror genre faces to keep an eye out for and one or two moments that save it from being a complete waste of time. Director Michael Shelton and writer Brian Patrick O'Toole seem to think that they're doing something quirky and unique, but it just comes across as annoying in some places and highly derivative in others. The last 10-15 minutes, in particular, really disappoint and I only hope that they move in another direction for whatever they line up next instead of trying to create a sequel.

The cast are a mixed bunch. Peter-Kaiser doesn't have much to do beyond being "the boogeyman" so he's fine in that regard, Michele Morrow is okay as the leading lady and Lynn Lowry has a lot of fun playing one of the worst mothers I've ever seen. Sam Skoryna is pretty weak as Officer Chris Watts, but Nathan Bexton makes things better with his amusing, eccentric turn. And it's always good to see Tiffany Shepis in anything, no matter how big her role or how bad the rest of the movie is.

The budget wasn't that big and this was Michael Shelton's first time as director (though it wasn't the feature screenwriter's first time as a feature screenwriter) so there's certainly room for him to develop his craft and improve upon this rather flat debut. He shows that he knows the basics, but any horror movie now needs much more than just the basics to make a good impression in a constantly overcrowded field.

I'll end by saying that this is, oh yes, something only to be bought if found in a bargain basement. 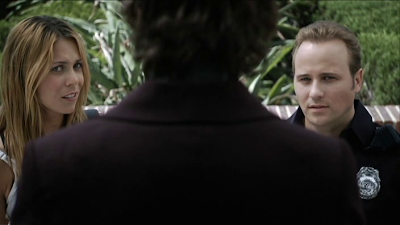