A classic caper from the much-loved Ealing Studios, The Lavender Hill Mob holds up today as a charming, amusing film full of great characters and a few fantastic set-pieces. It's overshadowed by a few other movies from the studio (does it get any better than The Ladykillers? I think not), but remains as watchable as ever thanks to uniformly perfect performances from everyone involved.

Alec Guinness is the leading man, he plays a mild-mannered bank employee named Holland. Holland oversees the transport of gold bullion from the refinery to the bank. He is as predictable as he is punctilious, but that hasn't stopped him from coming up with a plan to rob the gold and give himself a lifestyle he could never otherwise afford. He needs the help of an artist named Pendelbury (Stanley Holloway), who spends most of his days making souvenirs out of lead, and two men with experience in criminal activities - Lackery (Sid James, here billed as Sidney James) and Shorty (Alfie Bass). The robbery should be easy, getting the gold out of the country and keeping hold of it might be the hard part.

Directed by Charles Crichton and based on a screenplay by T. E. B. Clarke, The Lavender Hill Mob starts off in an exotic locale with a character about to tell his tale before jumping back into the past to become a low-key character piece. The beauty of the movie is that, for most of its run time, it remains a low-key character piece. You want these criminals to succeed because, well, they're just a good group of blokes aiming to commit a crime without hurting anyone besides the bank. And considering how the banks have failed people in recent years, the whole thing feels much more satisfying.

Alec Guinness gives yet another wonderful performance, Stanley Holloway is a great partner for him and both Sid James and Alfie Bass bring a roguish charm to their roles. Marjorie Fielding and Edie Martin are good as two women who live in the same block/house as the men, the former has a couple of fun scenes while the latter has a lot less to work with. John Salew and Ronald Adam are also enjoyable in their respective roles and there's even the teeny tiniest of roles for one Audrey Hepburn (don't let your attention stray for a moment or you will miss her).

If you're unfamiliar with the output of Ealing Studios then I urge you to change that as soon as possible and you could do a lot worse than starting your exploration of their movies with The Lavender Hill Mob (although there is a risk that it will spoil you when it comes to viewing many of the others). 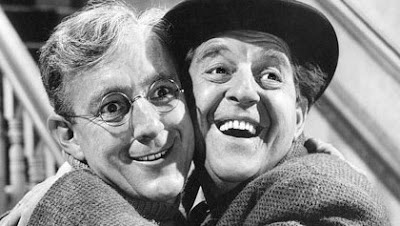