And Now For Something Completely Different (1971)

The first movie outing for the Pythons, this is little more than a loosely connected series of sketches taken from the first series and the, yet to be aired at the time, second series. The fact that most of the sketches are typically brilliant is what makes this film so enjoyable, even if it's a lesser outing when compared to the features that the gang would release.

All of the guys are here - Graham Chapman, John Cleese, Terry Gilliam, Eric Idle, Terry Jones and Michael Palin - and all have their usual heavy workload, sharing in the scripting duties before taking on multiple character roles to act out everything onscreen. They are joined by Carol Cleveland, Connie Booth and one or two others, but they remain front and centre, with Gilliam providing numerous bits of animated madness, as ever.

Director Ian MacNaughton doesn't really do much to move the material firmly away from TV territory. In fact, the familiarity of it all adds to the enjoyment. Any fan hearing of "the dead parrot sketch" or "the lumberjack song" will be ready to laugh and fire quotes at anyone else willing to listen. These are much-loved comedy sketches for good reason, because they're fantastic.

One of my favourite sketches sees a milkman lured into a household by a voluptuous housewife before things get absurd. It takes the easygoing attitudes of the time - typified by the "Carry On..." films and, later, the "Confessions Of..." movies - and then twists them to great comic effect. The perfect blend of clever and stupid, much like the absurd brilliance of "Hell's Grannies" and, of course, the grand finale showcasing "The Upper Class Twit Of The Year."

The Monty Python movies were never really designed to win over new fans. The group already had a sizable, loyal fanbase and rewarded them with a number of fun features. It's this first outing, however, that makes no concessions whatsoever to people new to the humour on display. Which is fine by me, especially when the result is as funny as this.

In summation - it breaks no new ground, but it sure does still tickle the funny bone. 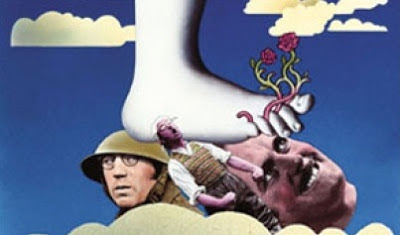