Written by Jason Filardi (it was his first script, or at least the first to get made into a feature anyway) and directed by Adam Shankman, Bringing Down The House is the kind of by-the-numbers comedy that nobody ever loves but everyone seems to pay to see at the cinema. Made for just over $30M, this movie ended up taking over $160M worldwide (according to boxofficemojo.com). That's a haul so impressive that I'm surprised we've not seen a sequel.

Steve Martin stars as Peter Sanderson, a tax attorney who spends more time working for his company than he does working out fun stuff to do for when he picks his children up from his ex-wife (Jean Smart). He does, however, make some time to chat online with a woman known as "lawyer-girl" and ends up arranging a date. When lawyer-girl (Queen Latifah) turns up she has to admit that she maybe isn't what Peter had in mind. Her name is Charlene, she's black and recently released from prison. She wants Peter to help clear her name and expunge her record. This all occurs while Peter is wooing a very important potential new client (Joan Plowright), looking after his kids and generally trying to keep his life on track. He does not want, or need, Charlene in his life. His friend, Howie Rottman (Eugene Levy), on the other hand, finds himself instantly enchanted.

Yes, you can check off the standard gags and plot developments that appear in this movie right now. Martin being unable to understand the slang used by Queen Latifah? Check. Martin later trying to use some slang and be "down" with some other African Americans? Check. Strained moments in which Martin tries to impress Plowright while keeping Latifah out of the picture? Check. The tough, streetsmart woman teaching the stiff, uptight tax attorney a thing or two? Check. The feelings still there between Martin and his ex-wife? Check.

It's fair to say that originality and suspense are not to be found here. It's also fair to say that none of the laughs are big laughs, but they are consistently good enough to build into something worth your time. Eugene Levy steals a few scenes, Missi Pyle is a lot of fun as a woman a lot tougher than she looks and the rest of the cast do just fine (including Michael Rosenbaum, who always seems to be ill-served by movies, and the ever-wonderful Betty White). It's Martin and Latifah, however, who really make this such an enjoyable hour and a half. While I've been a life-long fan of Martin, I've quickly warmed to Queen Latifah (real name = Dana Elaine Owens) and find her to be a welcome addition to any movie that she stars in. Even if the movie itself isn't all that good.

There are many people who will think that I shouldn't rate Bringing Down The House as highly as I do (even though I've gone for a score that's just above average), but I'm willing to bet that some of them enjoyed it more than they admit to. After all, that $160M worldwide total speaks for itself. 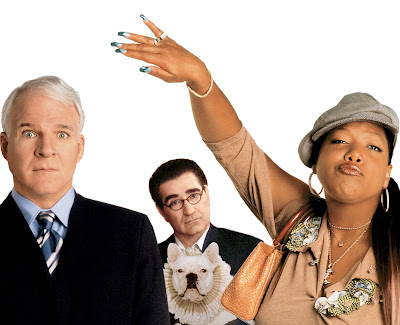