Based on a book entitled 'The Lonely Guy's Book of Life' by Bruce Jay Friedman, this romantic comedy follows the main character, Larry Hubbard (played by Steve Martin), as he adjusts to his new status as a bona fide lonely guy. Thankfully, he bumps into experienced lonely guy Warren Evans (Charles Grodin) and received plenty of advice and a few rules to live by, making the loneliness a less painful experience than it can be for some people.

Although it feels like a number of sketches just thrown together with a very thin narrative strand running from beginning to end, that's not a bad thing for a comedy that has as many fun moments as this one does. Martin may not be in full-on whacky mode here, but he gets to act impressively stupid on a number of occasions, whether he's trying to deny evidence of an unfaithful girlfriend right in front of his eyes or he's just applied a can full of fake sweat to make himself look like a dedicated jogger. Charles Grodin is equally good, dispensing great advice such as the right greenery to put in your new flat and how to have a lively party atmosphere without having (m)any actual guests in attendance. Judith Ivey is lovely and funny as Iris, a woman that Larry falls for while seeming unable to keep her telephone number safe and legible, and Steve Lawrence and Robyn Douglass have fun as two people who will never be lonely.

Adapted into film form by Neil Simon, Stan Daniels and Ed Weinberger, and directed by Arthur Hiller, this is goofy and surprisingly sweet from start to finish. Everything is handled in just the right way, even the few moments that show how many lonely guys decide to end it all by jumping off the Manhattan Bridge.

Extra laughs come from great cameo roles from Merv Griffin, Joyce Brothers and Loni Anderson (all playing themselves) and, as strange as this may sound, there are also some tips in the movie that do feel genuinely helpful.

It's far from the best of Martin's 1980s output, but this is well worth seeing if you're a fan of him and/or Grodin. And also, of course, if you're wanting to remind yourself that being single isn't usually half as bad as this movie makes it out to be, thank goodness. It just feels that way at times. 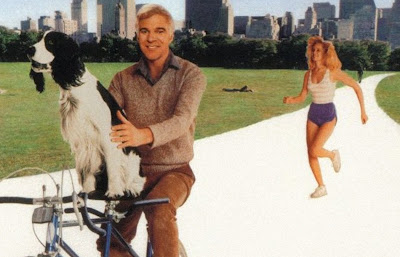