Directed by Lawrence Kasdan, who also co-wrote the screenplay with his wife Meg, Grand Canyon is a well-intentioned film that just doesn't really do anything. It allows one privileged white male character to help some black people, lets Steve Martin step away once more from his comedy schtick and shows a bunch of women who either need a man or a baby to be happy. Yes, it's THAT bad in places.

It's also quite good in different parts. The acting from all concerned - Martin, Kevin Kline, Danny Glover, Mary McDonnell, Mary-Louise Parker, Alfre Woodard, Tina Lifford, a very young Jeremy Sisto - is very good. Individual scenes are well done, especially a moment that sees Martin approached by a robber, but this is a movie that runs for two hours, and when I say runs I actually mean to say meanders.

What's the plot? Well, Kevin Kline and Mary McDonnell are a married, well-to-do white couple with some relationship problems. They have a son (Sisto) who is heading off to camp, which leads to the "empty nest" feeling for McDonnell. Kline decides to drive home one night through a slightly rough area in which he sticks out like a sore thumb. Thankfully, he's helped out of there in one piece by Danny Glover and the two strike up a bit of a friendship, one that allows Kline to make up for a multitude of sins by helping Glover and his family. Meanwhile, Steve Martin is a Hollywood producer who makes ultra-violent films until his own encounter with violence leads to an epiphany and Mary-Louise Parker gets herself all in a muddle after falling for the married Kline.

I enjoyed Grand Canyon when I first saw it about twenty years ago. I was a teenager and this is a simple, naive film. The fact that I enjoy it a lot less nowadays, having seen and experienced much more of the world, comes as no surprise. The fact that I still enjoy it in any way is the surprising part. I'm sure there are people who will feel almost insulted by the way the movie treats some, if not all, of its characters. It's the kind of movie written almost purely to assuage the collective guilt of white, middle class America.

Maybe that's why, as a white, middle class (*shudder* what have I become?) Brit, I don't hate it as much as I should. 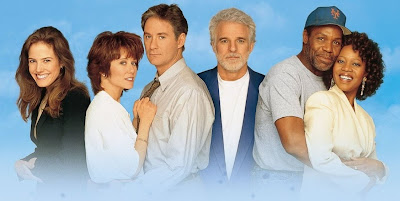