It's never a good idea to take a beloved comedy icon and try to put your own spin on it, but Steve Martin doesn't seem to care about the risks involved. In fact, some might say that he took an even bigger chance when he took over the role of Inspector Clouseau in The Pink Panther movies, but there's no denying that a LOT of people loved both the character of Sgt. Bilko and the actor who originally played him, Phil Silvers.

Master Sergeant Ernest G. Bilko (Martin) is a fast-talking, fast-thinking conman and gambler who has managed to spend years in the army without getting in trouble for any of his mad schemes and money-making operations. That looks as if it could change when he's assigned a new man to his company, Pfc. Wally Holbrook (Daryl Mitchell), just before the arrival of Major Colin Thorn (Phil Hartman) and the two people that he has brought along to perform an exhaustive audit of everything that Bilko is responsible for. If there is one item of stock missing, one dollar in the wrong place or one shred of evidence showing that he is up to mischief then Bilko will end up out on his ear, to put it mildly. He also needs to buck up his ideas and find time to marry his long-suffering fiance, Rita Robbins (Glenne Headly).

Full of ridiculous moments of near-farce, great dialogue and fun characters, Sgt. Bilko is a movie that I have always liked since first seeing it, and always felt that others didn't really give a chance. Martin is no Phil Silvers, but he's not trying to be. He's just mixing his own comedy persona with the character of Bilko, and it works.

The direction from Jonathan Lynn is unspectacular, but that's something that can be said for pretty much every film that he's ever helmed. He's competent with comedy material, and has been in charge of a couple that I really like, but the strength usually lies in the scripts that he's working from. Luckily, this one (written by Andy Breckman) is a goodie, full of energy and laugh out loud moments.

As well as Martin shining in the lead role, the likes of Headly and Hartman put in some wonderful work. Dan Aykroyd is particularly enjoyable as the Colonel who always suspects Bilko of being up to something but also likes just having him around. Daryl Mitchell may not have the best role, but he's enjoyable enough as the wide-eyed newbie learning all of Bilko's tricks from his first moment in the company. Chris Rock and Cathy Silvers are good fun as the auditors, and Max Casella, Eric Edwards (most memorable as Pvt. Doberman) and Pamela Segall are all worthy folk to be in cahoots with their scheming leader.

It would be wrong of me to assume that lots of people disliked Sgt. Bilko because it wasn't exactly as they wanted it to be and it wasn't the old Bilko, but I can't help feeling that there was certainly a bit of a cloud over this movie as soon as it was announced. And I get it, especially when a TV show or movie is updating an old, much-loved slice of classic TV. I also get that good things can come out of such developments. Some people think that in an ideal world we'd have no remakes or sequels proving the law of diminishing returns, but that ideal world would also see us missing out on some GREAT (in fact, I'll say it, CLASSIC) movies. Sgt. Bilko isn't a classic, but it's a cracking comedy for those who like the cast and enjoy their comedy with funny lines flying thick and fast through every scene. 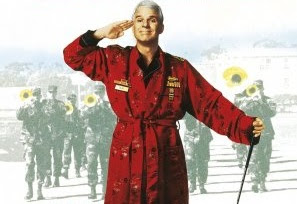