I have a bizarre viewing relationship with this, the last, Monty Python movie. I first saw it many years ago and quite enjoyed it. I was young, there were many jokes that I didn't get, but it had enough amusing moments to keep me entertained. Just. Then I saw it as an adult and enjoyed it a lot more. I'm sure that I even thought those who criticised it were being unduly harsh. On a recent rewatch, with me still being an adult (I haven't suddenly developed some kind of Benjamin Button syndrome, despite my moments of immaturity), I have found that I fall in line with the majority. The Meaning Of Life has moments of greatness, but it's far from a great film.

Directed by Terry Gilliam and Terry Jones, this film suffers from excess in a way that neither of the previous Monty Python features could have tolerated. In fact, one segment entitled "The Crimson Permanent Assurance" almost unbalances the entire thing. The fact that it was directed by Gilliam, who can't seem to align the practical aspects of controlling costs and maximising efficiency alongside the need to express his artistic vision, should come as no surprise to those who have continued to watch the ups and downs of his career.

Putting that segment aside, despite the fact that it comes along at the start of the movie and then interrupts proceedings later on, what else is on offer here? It's very hit and miss. Written and acted, as usual, by the whole troupe - Gilliam, Jones, Graham Chapman, John Cleese, Eric Idle and Michael Palin - with supporting turns from Carol Cleveland, Patricia Quinn and a few others, the sketches touch on various aspects of life and humanity. Birth is covered, with the superb song "Every Sperm Is Sacred" being a highlight, war is looked at a couple of times, the significance of our lives (or lack of it) is brilliantly summed up in "The Galaxy Song" (^^^see above^^^), there's the unforgettable sight of a certain Mr. Creosote and, of course, Death makes an appearance towards the end of the movie.

Fans of the Pythons will still find enough to enjoy here. Gilliam gets to throw in some crazy imagery, everyone has at least one scene-stealing moment and the surreal "find the fish" sequence has grown from something that I simply endured to an inspired moment of brilliance that I could probably watch repeatedly without never becoming bored. There are many great lines, but they often happen to be caught amongst many distinctly average, or even unfunny, moments.

I can't say this is a BAD film, and I'd hope that any Monty Python fan would agree, but it's a big step down from the previous movie outings. The BIG laughs are few and far between, though it's important to remember that they are still there, but a lesser Monty Python film is still full of more wit and ideas than a hundred other movies released in the same year. 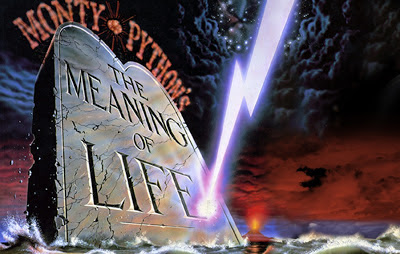