Monty Python And The Holy Grail is my favourite film from the Pythons. I really love Life Of Brian, but this film just has even more inspired lunacy in the mix. The big laughs here are BIGGER laughs, to me, and it's one of the most quotable movies of all time. Don't believe me? Ask any fan about it and see how long it takes to hear them reel off a full quote.

What's the story? Well, it's supposed to be all about King Arthur (Graham Chapman) assembling the Knights Of The Round Table and going on a quest for the holy grail, but it's really just a series of fantastic sketches that use the time and characters to wring the maximum comedy from every moment of screentime.

It starts off with the opening of Dentist On The Job (a gag that surely confused a number of cinema-goers back in the mid-70s), moves into a number of sequences in which those responsible for the subtitles try to further their own bizarre agenda and then, eventually, gets to the main "storyline".

Directed by Terry Gilliam and Terry Jones, and written and acted by the whole gang (Chapman, John Cleese, Gilliam, Eric Idle, Jones and Michael Palin), there are also small, but memorable, roles for Connie Booth - playing a witch, with a witch nose and everything - and Carol Cleveland.

I have tried to refrain from simply listing all of my favourite scenes, but it's hard. The film is like a Greatest Hits Of Comedy album with no weak spots. There are amusing animated skits from Gilliam, some hilarious anachronisms, the Camelot Song (Knights Of The Round Table), the Black Knight, the Knights Who Say 'Ni' and much, much more.

Okay, I caved in and listed a lot of my favourite scenes, but even that doesn't begin to cover it. The only way I could fully express my love for every moment of this movie would be to just copy and paste the entire script here. It's THAT good. 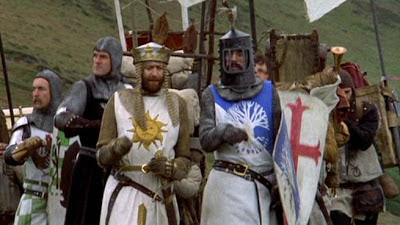