An irreverent, clever look at religion from the Monty Python team, this comedy classic tells the story of Brian (Graham Chapman), a young man who spends his life, due to numerous coincidences, being mistaken at particularly inconvenient moments for the messiah when he was, in fact, born in the stable next door. He gets himself involved with the People's Front of Judea (not to be confused with the Judean People's Front . . . . . . . . . . splitters!) and is soon wanted by the Romans for a number of crimes. Considering the fact that just uttering the line "that piece of halibut was good enough for Jehovah" is enough to get a man stoned to death, things don't look too good for Brian.

Directed by Terry Jones, the script features the usual contributions from the whole team (Jones, Chapman, John Cleese, Terry Gilliam, Eric Idle and Michael Palin) and the gang also take their usual selection of multiple roles. Taking one example, Michael Palin plays an ex-leper cured by Jesus and still trying to make a living from begging, a spectator insulted for his big nose, Pontius Pilate, a member of the People's Front of Judea named Francis and quite a few more memorable characters.

While the comedy is still scattershot in places, this is a more cohesive and focused film than many others from the Python troupe. Fans of Terry Gilliam's artwork may wish there was a bit more of it here, but there's a glorious title sequence and at least one other enjoyable skit later in the film that features some of his art. Everyone involved seems to agree that they were at their peak here, with Chapman in especially fine form, and the tightrope being walked, as they tried to make the best film possible with such controversial central subject matter, may have helped.

Despite what the thin-skinned, quick-to-take-offence, complainers will say, Monty Python's Life Of Brian isn't actually an offensive movie, unless you're offended by being made to laugh so hard. Jesus is mentioned, parallels are made, but the gang never actually mock the life of Christ directly. What they do is much better than that. They make jokes about the time, about the attitudes and about blindly following people who may be equally desperate for signs to show them the way forward. It's about silly names, the importance of correct grammar and the futility of people fighting against each other, despite having the same aim.

And it poses that vital question: "What have the Romans ever done for us?" 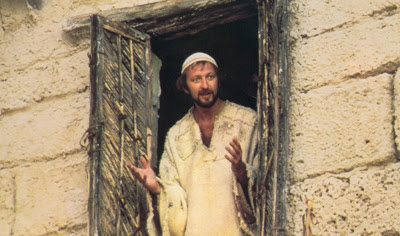