Updating the classic tale of Cyrano de Bergerac, Roxanne is a superior romantic comedy that benefits enormously from a cracking script (written by the leading man, Steve Martin). It has at least two set-pieces, in my opinion, that hold up alongside any truly great comedy moments that you could think of and the rest of the film rarely dips. Well, not too far anyway.

Martin plays Fire Chief C. D. Bales (the C stands for Charlie). C. D. is a great guy. He's selfless, intelligent and very funny. He also has a big nose. A very, very big nose. Mention it at your peril. So when the beautiful and sharp Roxanne (Daryl Hannah) moves into his small town, C. D. may find himself falling for her but also keeps remembering that nothing will happen - it's as plain as the nose on his face. Things get complicated, however, when Roxanne falls for the handsome, but pretty vacant, Chris (Rick Rossovich). The feeling is mutual, but Chris gets nervous about wooing the lovely lady. C. D. suggests a love letter, using the power of words to win over Roxanne completely, and decides to help Chris by providing the words for him. Roxanne is on cloud nine, having found what she thinks may be her ideal man - blissfully unaware that the words are coming from C.D.

I've never been a big fan of Daryl Hannah, but she's very suitable in her role here and the central "love triangle" is completely believable thanks to her solid performance and, of course, her beauty (hey, not being TOO shallow, if a film features a potential love interest appealing to a wide range of potential suitors then that person should have an obvious beauty - be it inner, outer or both). Rick Rossovich does a great job, especially in the way that he plays the comedy, and makes for a fun fly in the ointment. He's shallow and slightly dense, but he's also pretty sweet. In a way. But this is, of course, Steve Martin's show and he's written a marvellous creation for himself to play. Defined by his humour, intelligence, quirkiness and that big nose, C. D. Bales is always fun to be around and a great updated version of a classic character. The rest of the cast includes Shelley Duvall, John Kapelos, Michael J. Pollard (a favourite of mine), Damon Wayans, Edmond Rostand and Fred Willard, all doing decent work.

Director Fred Schepisi has never created anything truly great, from my knowledge of his filmography, and I would nominate this movie as his best work. There's nothing special on display, however, and everything positive comes from the script and performances. Of course, the performances are directed by . . . . . . the director, but I'm just saying that nothing else stands out. The soundtrack isn't memorable, the camerawork is fairly straightforward, there are one or two standard montage moments, nothing feels particularly fresh or stylish. The good thing is that the movie doesn't need to feel fresh or stylish. It's good enough as it is.

I don't quite love Roxanne as much as I did a decade or two ago, but I still love it enough to consider it a great one to watch, purchase and rewatch on numerous occasions. 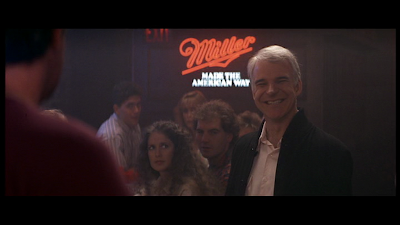