When viewers first meet Navin Johnson (Steve Martin) he's a bum with only two things - his friends (aka other bums in the immediate vicinity) and his Thermos. But, boy oh boy, does he have some story to tell. It all starts many years in the past, when Navin was born a poor, black child.

Essentially a series of hilarious skits thrown together, this was Steve Martin's first leading role in a feature film and remains a quintessential outing for the man who once proclaimed himself "the world's funniest white man."

Written by Martin, with Carl Gottlieb and director Carl Reiner also sharing the workload, this includes such classic moments as "the Thermos song", a look at the sordid world of cat juggling, a young man happily finding his "special purpose" and much, much more.

The leading man may be the film's biggest strength, but the supporting players shouldn't be overlooked. Bernadette Peters has been putting in great work for years, and this is one of her best, sweetest roles - a woman who ends up as the potential love of Navin's life. Jackie Mason gets great one-liner after great one-liner, playing a gas station owner who treats Navin surprisingly well while being constantly bewildered by his naivete. M. Emmet Walsh has a hilarious, memorable, role as someone who wants to kill the lead character, just because his name was picked from the phonebook, and Catlin Adams also makes quite an impression as Patty Bernstein, a stunt bike rider who takes a shine to Navin and wastes no time in getting what she wants.

It may not be as smart, or indeed sophisticated, as later collaborations between Martin and Reiner, but that doesn't mean that it's not as funny. If done well, stupid-stupid can be just as enjoyable as smart-stupid. The Jerk remains, arguably, the pinnacle of stupid and a favourite of mine. 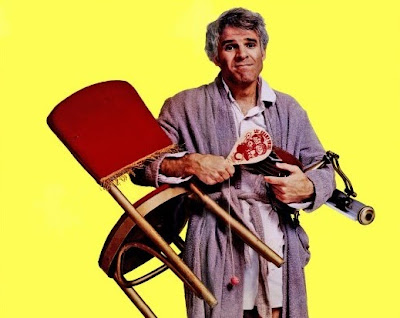