Hammer returns to the material of Dennis Wheatley, this time with a markedly inferior final result and with a movie that would remain their last horror film until their 21st century resurgence (however long THAT lasts).

Richard Widmark plays occult novelist John Verney, a man placed in a very unusual position when he agrees to take in and take care of Denholm Elliott's daughter, a young nun named Catherine (played by the lovely Nastassja Kinski). What he doesn't know is that Catherine is being pursued by some . . . . . right nasty sorts (led by Christopher Lee as Father Michael Rayner) with a right nasty plan, to put it mildly.

There is nothing here of any real note except, I suppose, how far removed it is from Hammer's usual restraint and class. The script by Christopher Wicking (with help from John Peacock and an uncredited Gerald Vaughan-Hughes) is okay, if a little clumsy in it's exposition of far-out ideas. The direction by Peter Sykes is unremarkable but also inoffensive. The acting is also distinctly okay but unspectacular (featuring, as it does, those already mentioned and also the likes of Honor Blackman, Anthony Valentine and even Frances de la Tour in a small role). And I suppose that some of the black magic rituals shown at least have a ring of authenticity about them, despite the rather lame effects/editing used.

Some of the stuff on show is, for Hammer, rather shocking. Not only do we get some bizarre, gory "muppet" moments but there's also more full-frontal female nudity than I have seen in any other Hammer movie. To be fair, I have not seen every Hammer film, but I have always known them to be, for the most part, more concerned with blood than sex although the latter is often catered for with suggestive scenes/performances and the occasional flashes from buxom beauties.

P.S. On an unrelated, and rather moronic-sounding, note: this movie has the single best bridge scene I have ever seen. I just liked the mechanism on display and had to mention it. 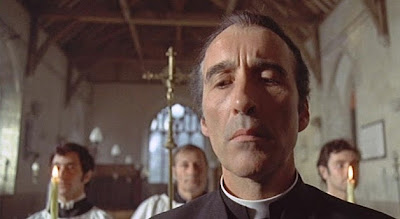