The third of the Karnstein trilogy, loosely connected movies from Hammer based on "Carmilla" by Sheridan Le Fanu, Twins Of Evil isn't too bad. Okay, I wouldn't exactly call it good, but it's certainly made more interesting thanks to the premise and yet another sterling performance from the great Peter Cushing.

The movie presents Cushing as a kind of witchfinder general type, Gustav Weil, quick to rouse his followers into a state of fervour before leading them off to burn some young woman at the stake. While this is a regular occurrence, it doesn't really deal with the main problem in his area, the nefarious Baron Karnstein (Damien Thomas). The Baron is a bad man, an evil man, but he's also well connected. Set against this backdrop of menace and paranoia, Gustav and his wife, Katy (Kathleen Byron), find themselves taking charge of their two nieces (the twins, played by Mary and Madeleine Collinson). The two girls quickly find themselves incurring the ire of their stern uncle, and one of them decides to retaliate by indulging in some shenanigans that would definitely not meet with approval.

As you may have already been able to guess, Twins Of Evil succeeds largely because of the twins. I'm not going to pretend that I kept up with exactly who was who, but that's fine because the movie does enough to keep viewers just informed enough to enjoy the twists of the plot (with a lot of the fun coming from the fact that the twin who turns to evil can then make use of the good twin to help protect her from Gustav and his band of followers). So I may not have remembered who was Maria (played by Mary) and who was Frieda (played by Madeleine) at all times, but I knew who was evil and who was good . . . . and then who was evil but pretending to be good and who was good being made to look evil.

The script by Tudor Gates isn't too bad, and the direction by John Hough throws in some nice, surprisingly atmospheric moments of spookiness. The acting is a mixed bag, with Cushing being his usual great self while Mary and Madeleine Collinson are . . . . . . . . . . well, they're okay, but obviously chosen more for their ability to be twins than any major acting chops. David Warbeck, Dennis Price and Kathleen Byron do pretty well, Katya Wyeth has a small, but memorable, role and Damien Thomas fails to impress as the dastardly Baron.

There are a few decent moments of gore, some nudity and a number of typical Hammer moments to keep fans amused, making this a solid piece of entertainment for those who already favour the style and ethos of the studio. 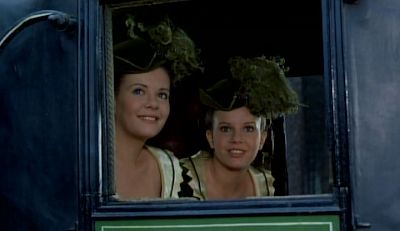