Robert Bowfinger has a dream and that dream is to make a major, hit movie. Impressed by the script for sci-fi actioner "Chubby Rain", he decides to get his cast and crew together and finally make something happen. It helps that his movie is going to star the hottest leading man of the moment, Kit Ramsey (played by Eddie Murphy). The big problem, however, is that Kit has no idea he is in the movie, which forces Bowfinger to . . . . . . . . . get creative.

Upon its initial release, many people hailed this as a return to comedy form for both Martin and Murphy and, somehow, I disagreed with them. Well, time has passed and now, finally, I see what everyone else saw back then. A hilarious, sharp, brilliant comedy featuring two men who would never again be quite this funny ( at least, that's my opinion as of today's date).

The script is full of great one-liners (such as my personal favourite: "let's try it one more time Slater, this time without the erection") and digs at the quagmire of modern movie-making with all that entails, including temperamental stars, young actresses doing whatever it takes to get ahead, the reach and influence of Scie . . . ummm any modern system of religious belief and the power of a beautiful lie.

Thankfully, we have a great cast delivering these points. Martin is on the same kind of hilarious, smoothly lying form that saw him entertain so much in the likes of Dirty Rotten Scoundrels while Murphy gets to show more than one side, as he usually does, without overdoing things, as he usually does. Then we have Heather Graham playing a not-so innocent . . . . innocent, Christine Baranski as a leading lady wanting her one shot at true stardom, Jamie Kennedy as a very resourceful car valet and, well, everybody else who gets screen time. The whole cast is great, even the smaller roles are filled by the likes of Terence Stamp and Robert Downey Jr.

Maybe you felt the same way as I did, that Bowfinger received far more praise than it deserved at the time, but if that's the case then I hope you revisit it some time. And I hope you also find that Bowfinger actually received just as much praise as it deserved. Because it's a fantastic comedy. 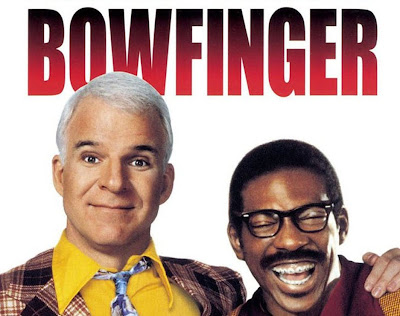