When asked to choose my favourite Steve Martin movie, it's a tough choice. This movie, The Jerk, Dead Men Don't Wear Plaid, Roxanne and so many others could be in the top spot. But people can be insistent when they ask such questions, and if they're insistent enough I usually cave in and tell them that The Man With Two Brains is my very favourite. Why? Well . . . . . . . . it just IS.

The demented storyline concerns the eminent brain surgeon, Dr. Hfuhruhurr (Martin), and the stroke of fate that puts him in the grasping claws of femme fatale, Dolores Benedict (Kathleen Turner). Dolores is a woman that we first see revelling in her evil ways, teasing an elderly husband until he can take no more. She wants him to die, she thinks that she is due to inherit everything, but things change. Just a few scenes later, Dolores is recovering in hospital and has the good doctor under her spell. But she's not the only woman to want him in her life. There is one other who appears on the scene, one with much nobler intentions and a sweeter personality. She just happens to be a brain floating in a jar in the laboratory of Dr. Alfred Necessiter (David Warner). Her name is Anne Uumellmahaye (voiced by Sissy Spaceck).

If that descriptive paragraph doesn't have enough lunacy in it for you then I feel that I should mention the subplot involving The Elevator Killer, a sobriety test that remains the best, and funniest, ever shown onscreen and a recitation of the classic poem entitled "Pointy Birds".

The madness of Steve Martin in his prime isn't for everyone, but it most certainly is for me. I've been a huge fan of the guy ever since I first saw his output from the early '80s (and I also used to own Steve Martin Live on VHS - a tape I nearly wore out because I watched it so often) and he continues to be, in my opinion, a giant of comedy. Oh, he may be far removed from the days when he could get away with the stuff on show here, but see him working a crowd, or even making people chuckle on Twitter, and you can easily be reminded of his power. Kathleen Turner had another potent kind of power, but it also shouldn't be forgotten just how great she is in this comedic role, one that uses both her sexual allure and a bravura willingness to go along with the madness. David Warner, Paul Benedict, Richard Brestoff and Randi Brooks all have their own memorable moments, while Sissy Spaceck may only be here in a vocal way but she's the sweetest brain in a jar that you could ever listen to. There's also fun to be had spotting Jeffrey Combs and James Cromwell in very small roles.

Director Carl Reiner, who helped to write the movie with Martin and George Gipe, knows how to make the most of every gag, as he would prove again and again over the years. His relationship with Martin would produce the best movies that either man would be involved in, with this being the pinnacle - two men who work brilliantly together being left to have a lot of fun at the height of their powers (comedically speaking).

It doesn't get much better than this, and if you disagree then you may be in need of some screw top, zip lock brain surgery. 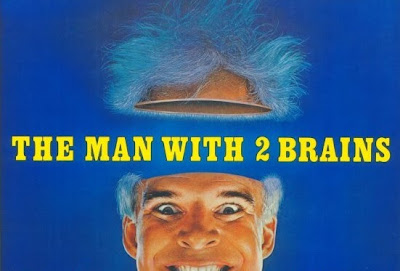