Beasts Of The Southern Wild was well-received when released in 2012. It wasn't unanimously loved, however, and some of the backlash that appeared has never really gone away, with good reason. I enjoyed Beasts Of The Southern Wild for much of the runtime, but I enjoyed the performances and the moments of surreal dreaminess as opposed to the way in which the characters are viewed or treated. I may be wrong here, but there's just something at the heart of the material that seems very wrong. Director Benh Zeitlin, and writer Lucy Alibar (who worked with Zeitlin to adapt her play into movie form), walk a tightrope, and should have walked it with greater care, in my opinion.

There's no denying that Quvenzhane Wallis gives an extraordinary performance in the central role, as Hushpuppy, the young girl living in an area of Louisiana known as the "Bathtub" as she is raised by her father, Wink (Dwight Henry). Hushpuppy talks, in voiceover, of everything being connected and even the smallest piece needing to fit into the right place, and that sums up the movie. It's about lives connecting and it's also, in an obvious way, about ecosystems (The Bathtub is at risk of major flooding thanks to global warming, but there are also some big beasts that may end up freed from their frozen status as glaciers melt). Yet it's also about surviving, it's about having the courage to stand up and face whatever may be heading your way, and it's about poverty.

While I don't necessarily think Beasts Of The Southern Wild is a racist movie, as it's been tagged by some people, I do think that it's misguided and just a bit careless when it comes to its portrayal of the main inhabitants of The Bathtub. They look out for one another, true, but they do so in a very self-serving manner, and always seem to make time for drinking and general merriment. There are serious moments in the movie, scenes that show young Hushpuppy in immediate danger, that are then left behind and never given a second thought. The central relationship between her and her father is dubious, at best, and potentially dangerous. Yet viewers are supposed to realise that they simply love one another as they try to struggle through some difficult times. Sorry, but I ain't buying that kool-aid.

The acting is great from almost everyone onscreen, but the problems come from the script. Having not read the original play by Alibar, I am not able to say if there are problems here that were always inherent in the material. I can, however, say that the script here is more problematic than the direction from Benh Zeitlin. The dialogue and characterisations are the major flaws, the smooth and dreamy direction from Zeitlin does a lot to make up for those aspects.

Worth a watch, and very interesting for a number of reasons, but this is a difficult film to recommend to people. Opinions vary wildly on it, check it out some time and see whether you end up a fan or detractor. 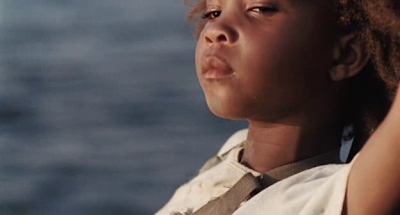