Vera Farmiga and Peter Sarsgaard play Kate and John Coleman, a couple very much in love with each other and with their children (Daniel, played by Jimmy Bennett, and hearing-impaired Max, played by young Aryana Engineer) and who have, to put it lightly, been through a really bad time of things. One problem birth that went horribly wrong, the accident that cost young Max her hearing, Kate's drinking problem. Hopefully, that's all now in the past as the couple realise just how much they have and decide to share their lives with someone less fortunate than most by adopting young, eccentric Esther (Isabelle Fuhrman, who is quite superb). It's not long until friction is caused, however, and it seems that Esther may have some hidden agenda despite her youthfulness but will anyone else see her manipulative ways except Kate, who keeps running into a barrier of disbelief thanks to the mistakes of her past.

Dark Castle, as those who have read some of my other reviews may know, have almost always provided me with the kind of fun horror I can easily enjoy even if it's unlikely to top anyone's "favourite movie" list. They do it once again here with a movie that builds tension nicely, throws in some genuinely uncomfortable moments and provides a great mix of uneasiness and more obvious shocks that should keep most modern movie audiences pleased.

The acting is all top notch with Farmiga and Sarsgaard anchoring the whole thing with performances that feel very real and naturalistic and, most importantly, believable amidst a plot that starts to pile up the number of unusual events and "coincidences" it needs to build up to the revelatory finale. The child stars also do very well and Isabelle Fuhrman does not get extra praise simply for landing the juicier role, she's really great in every scene she's in and able to run through a whole gamut of characteristics whether they be faked for the benefit of an audience or genuinely peeking out from behind the mask of her character.

Another string to Orphan's bow is how it mixes the slightly absurd with the very real, affecting horror of things such as the potential loss of loved ones, the acceptance of someone new into the family unit and the guilt that parents can live with for many years while keeping things hidden from everyone around them. Jealousy is a major force in this movie and children vying for attention from their parents can be selfish, manipulative and ruthless in many ways . . . . . . so Orphan just manages to take that to an extreme and let things unfold with horrific consequences.

Impressively handled by director Jaume Collet-Serra, it's rare to see a mainstream horror movie handling such disturbing themes (and, despite the glossy coating, there are certainly a few disturbing themes throughout) and all involved should be given a tip of the hat for getting right behind the material and giving us something that ends up being familiar. But oh so different. 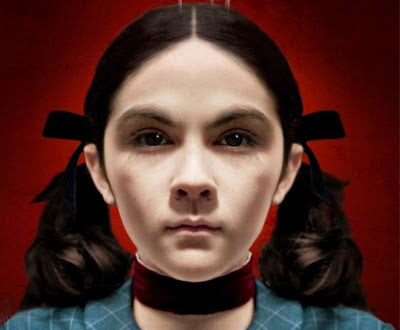