Crescendo is another lesser-known Hammer movie that stands firmly in thriller territory, as opposed to the many solid horrors that they released. Funnily enough, while the movie was running I couldn't help but think of Amuck! The two have superficial similarities here and there, but the latter movie is a much more enjoyable experience.

Stefanie Powers plays Susan Roberts, a young woman who travels to the South of France to work on her thesis about a famous, deceased composer. While there, she is lucky enough to be shown a lot of hospitality by the composer's widow (Margaretta Scott) and his son (James Olson). But maybe that's not such a good thing, especially as she starts to see how strange they are.

With the addition of a creepy manservant (Joss Ackland) and a scheming maid (Jane Lapotaire), this thriller really overcooks everything in a way that could have been entertaining if the central character interactions were more fun. Sadly, they're not and the film suffers because of it.

The direction by Alan Gibson is not lively, or stylish, enough to elevate the weak script by Jimmy Sangster and Alfred Shaughnessy. Nobody involved has the courage to make things darker or sleazier, which is why a movie like Amuck! will always play better (hey, if there are many failings elsewhere in a movie then darkness and eroticism can help a lot . . . . . . . just look at the likes of Basic Instinct and anything from 20 years ago starring Shannon Tweed).

Stefanie Powers is okay in her role, as beautiful as ever and almost believably manipulated into sticking around even as things get curiouser and curiouser, while Margaretta Scott and James Olson roll their eyes and go over the top whenever possible. If you can watch Olson in the second half of the movie without thinking of one or two particular scenes from Dirty Rotten Scoundrels then you're a better man than I am. Jane Lapotaire is annoying, but Joss Ackland almost manages to counterbalance her badness, though not quite.

It remains a notch above the very worst that the studio released, but it's a close call. 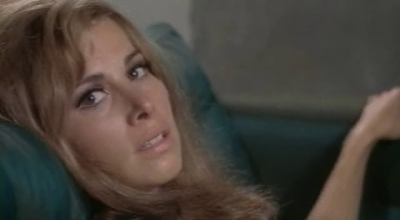