Yet another movie to highlight when people start ranting and raving about how all remakes are the work of the devil, Dirty Rotten Scoundrels is a remake of a 1964 movie, Bedtime Story. I've not yet seen Bedtime Story, so I can't say if this film is better or worse, but I can tell you that this is another great vehicle for Steve Martin, this time sparking brilliantly off Michael Caine.


The script, by Dale Launer, Stanley Shapiro and Paul Henning (the latter two being responsible for Bedtime Story), is consistently smart and witty, and the set-pieces are enough to lift the whole film into the realm of greatness.

Michael Caine plays Lawrence Jamieson, a sophisticated con-man who works on a large scale. His nose is slightly put out of joint when he encounters Freddy Benson (Martin), a small-time con artist who may cause problems. Benson may not be operating in the same league as Jamieson, but as the former puts it: "A poacher who shoots at rabbits may scare big game away."
When his attempts to get rid of Freddy keep failing, a truce is called. The experienced, sophisticated con-man will educate the talented novice. And if the two feel that the education is concluded, well, there's always the chance to compete against one another as they see who can extract the most money from Janet Colgate (Glenne Headly). The prize? Well, it's kind of a winner take all deal.

Directed by Frank Oz, who hasn't directed a bad movie in his entire film-making career (as far as I'm concerned . . . . . . and I will debate that point with anyone who cares to try), this is a warm, lively pleasure from start to finish.

It may not have all of the whackiness that Martin used to get away with in the earlier years of his movie career, but it does have sparkling banter between the leads, a sequence that introduces viewers to a very special man named Ruprecht and many other moments that make me laugh so hard I sometimes get worrying looks from people who think I am perilously close to having a seizure.

While Caine and Martin are superb in every scene (this brings out the best in both of them, I only wish they had found something else to work on together), there's plenty to praise in the performance from Glenne Headly, who holds her own alongside the gentlemen and plays up the sweetness of her character while also reacting in the best possible way to the inspired lunacy that builds and builds. Anton Rodgers and Ian McDiarmid do well enough with their small roles, and I've always been a big fan of Barbara Harris, who has a lot of fun here playing Fanny Eubanks (aka Lady Fanny of Omaha).

This may not be absolutely perfect, but it comes close enough for me (as so many Steve Martin movies from the '80s do). We can all just breathe a huge sigh of relief that the initial pairing of Mick Jagger and David Bowie didn't come to fruition. The mind boggles at how THAT film would have turned out. 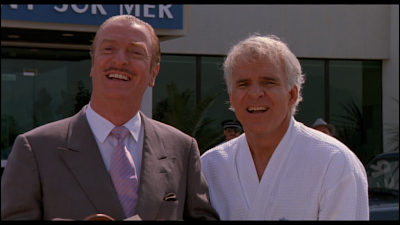