Let's get one things clear right from the off. Despite various soundbites and hyperbole bandied about, this movie is not as funny or funnier than Shaun Of The Dead. It's not up there with the best of the horror comedies from the past (the likes of An American Werewolf In London, The Return Of The Living Dead, etc), but it does easily earn a place on the second tier just below them.

Michael Rooker plays Grant Grant, a small-town guy through and through, who has his life, and physicality, changed when he's infected by an other-worldly parasite. Hiding his changes from his wife (played by the beautiful Elizabeth Banks) and everyone else, except his victim(s), it's only when the local police (led by the immensely likable Nathan Fillion) put things together that he has to hide while the changes continue and a plan to infect the entire town develops.

Apart from those mentioned, I should also comment on Gregg Henry's brilliant and hilarious performance as beleaguered mayor, Jack MacReady. He's all cursewords and bluster and steals almost every scene he's in. While the others onscreen don't make quite the same impact they are all very good, and Tania Saulnier is a talented young actress I'd certainly like to see in more movies.

Director and writer James Gunn may not top his work on the Dawn Of TheDead remake, which benefited from his superb script, but in many ways he makes a film that's altogether more pleasing for genre fans; packed, as it is, full of references to genre works and people while also providing solid entertainment and thrills in a decent mixture of slime, gore and giggles.

Where the movie falls down slightly is in its use of juxtaposition for comedy effect. One scene in particular, a rape (some may disagree with that definition but that IS what it is) intercut with some drunken singing and revelry, fails almost completely because the contrast is just TOO jarring to take for laughs. That aside though, the sharp script and spot-on performances (along with the decent effects and more "out there" moments) help to make this a worthy entry into the modern comedy-horror subgenre. 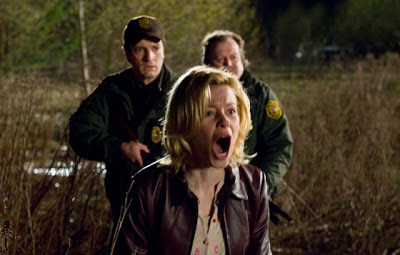