Written and directed by the fairly prolific John Hughes (he only directed about 8 movies, but wrote over 30), this road trip comedy marks a career high for the much-loved John Candy, while also providing a number of great moments for Steve Martin. Martin is, essentially, the straight man here but he's on top, tightly wound, form and works so well alongside Candy that the two individuals become one great, eminently watchable, duo.

Martin is Neal Page, a man desperately trying to get home to his wife and kids in time for Thanksgiving dinner. Unfortunately, he keeps finding his progress impeded, accidentally, by Del Griffith (Candy). When the two men eventually meet face to face, and introductions are made, things don't get any better. Del talks a lot, he has a number of annoying habits, and he seems to be a bit of a disaster at times. He also has a big heart, however, and does his best to help Neal get home. Neal, for his part, continues to get more and more irritated by Del, though it's hard to stay angry at the guy. But, despite flight delays and rental car problems and hotel rooms with only one bed, the objective remains the same - get home.

With an ending as sappy and manipulative as it is sweet and moving, John Hughes walks a fine line here between the great laughs and the emotional core that he gives the material. Thankfully, the central pairing of Martin and Candy make the material work a lot better than it would have in lesser hands. Martin oozes cynicism and, at times, loathing. Candy is a big ball of positivity, even as he bumbles his way forward while leaving a big mess in his wake. Hughes, however, writes great moments for both, treating both characters with equal favour. Candy may get a number of great lines and sweet moments, but Martin raises big laughs when his temper explodes on at least two occasions - one leading to him emphasising that not everything is an anecdote and the other leading to a classic, profanity-laden exchange with a car rental agent, played by Edie McClurg.

The cast also includes Laila Robins (playing the concerned Mrs. Page), Michael McKean in a small role as a traffic cop, Kevin Bacon in a cameo as a commuter racing for a taxi and Dylan Baker, in his first cinema feature role, as a hick with one of the most memorable lines in the entire movie.

Everything is topped off by a decent soundtrack, I've always particularly enjoyed the use of "Red River Rock" here, and paced perfectly for the 93 minute runtime. There are flaws, with the heavy-handed ending being the major one, but it's a hard movie to dislike. Especially around Thanksgiving time. 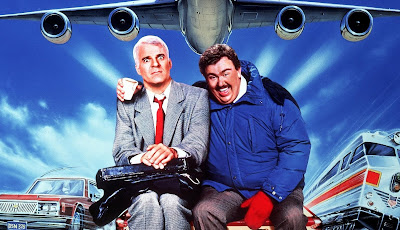