Mixed Nuts is an inferior, but ultimately enjoyable, rom-com set on Christmas Eve in a crisis hotline office. The team are about to be evicted, but only Philip (Steve Martin) knows this. He's not wanting to break the bad news to the lovely, loyal Catherine (Rita Wilson) or the crabby and bitter Mrs. Munchnik (Madeline Kahn). While dealing with a variety of calls, the team ends up in the middle of a domestic between the heavily pregnant Gracie (Juliette Lewis) and her lovable loser of a boyfriend, Felix (Anthony LaPaglia).

This is very standard stuff, especially if you're familiar with the work of Nora Ephron (who both directed this movie and also co-wrote the screenplay with her sister, Delia - not an original piece, the two tweaked and reworked the script of Le Père Noël Est Une Ordure). It's also good fun for anyone who enjoys the featured cast members.

As well as those mentioned, Adam Sandler has a fun role (although he makes use of his standard annoying vocal style and also gets to sing some stupid lyrics), Liev Schreiber is wonderful as a transgender individual named Chris, Parker Posey and Jon Stewart have small roles and Garry Shandling gets to be entertainingly unpleasant for every minute of his limited screentime.

The script may not be the sharpest, and the direction may be a bit flat, but things are improved immeasurably by all of the leads. Martin is good fun, as is Wilson, but more laughs come from the scenes featuring Lewis and LaPaglia. The most laughs, however, come from any scenes featuring Madeline Kahn, easily reminding viewers of just what a great comedic actress she is. She's one of the best, and one of the major plus points of Mixed Nuts is the fact that it lets her steal every scene that she's in.

I doubt that anyone will list this as a favourite film, but there's enough here to make it a fairly enjoyable 90 minutes. 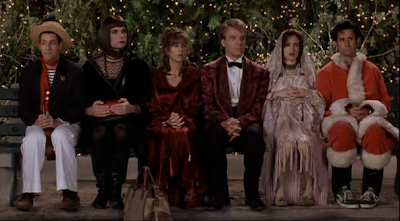