Robert Hardy plays a smothering father in this bizarre, lesser Hammer film directed, with little enthusiasm or flair, by Peter Sykes. His son and daughter (Shane Briant and Gillian Hills) are kept locked up as much as possible, kept away from each other and kept in a weakened state thanks to some regular bleeding. Hardy is convinced that his children have inherited a family madness and hopes that a visiting psychiatrist (Patrick Magee) can find a cure. Meanwhile, local villagers are getting up in arms as yet another poor woman's body is found in the woods.

With a lame script by Christopher Wicking, horribly ham-fisted approach to the material, a lot of overacting and very little gore, this Hammer horror has very little in it to recommend to fans. It does have a soupçon of nudity for fans of Gillian Hills and Virginia Wetherell, and a few great utterances from the enjoyable Magee, but that's really all there is to it.

Most of the cast are completely wasted, with the notable exceptions of Kenneth J. Warren, who has fun in the role of a manservant often going above and beyond the call of duty, and the eye-rolling Magee. Hardy, Briant, Hills, Wetherell, Paul Jones, Robert Brown and even the great Michael Hordern, are all given pretty short shrift.

The ideas put forward, especially during the finale of the movie, are actually quite interesting and twisted for Hammer, but a good movie does not come from intriguing ideas alone. It may be as handsomely staged as ever, but this is one best avoided by anyone other than completists. 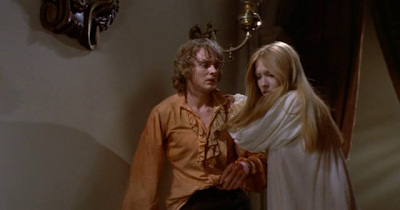