While this isn't the first non-comedic performance from Steve Martin, Leap Of Faith was the first serious film that I saw him in and the first time that I realised there was more to the man than just his wild and crazy comedy. I was also pleasantly surprised to find that a) the film was very good and b) Martin was just as good while not mugging for the laughs.

The film is all about a fake faith healer named Jonas Nightengale (Steve Martin), who ends up having to kill time in a small town when one of his vehicles needs repaired. Always one to make the best of a bad situation, Jonas gets his people to set up the tent and start spreading the word. He knows that he can still make a fair bit of money off the locals, it might just take more effort than usual. The people aren't exactly rolling in money or good luck, as the local Sheriff (Liam Neeson) emphasises to Jonas and his colleague, Jane Larson (Debra Winger). As Jonas starts to work from his usual bag of tricks things start to happen that may prove that the trickster is being tricked or, even worse, that he's about to meet a "genuine article."

Directed by Richard Pearce and written by Janus Cercone, Leap Of Faith is solid when it comes to both the script and execution of the material, but Martin is the big draw. During the opening sequence of the film, showing his character attempting to avoid a ticket being issued (by an officer played by Troy Evans), things are not that impressive. It quickly establishes the main character and the mood of the whole thing, but Martin doesn't seem to be right for the role. That all changes, however, when he gets onto the main stage and starts working a big crowd. He slips on his role like a bright suit, dancing and shouting, responding to information being fed to him via earpiece, tricking people into thinking that he can be the person to save them from their troubles. It's grandstanding theatrics and Martin does it with the air of the assured performer that he is.

The rest of the cast give him great support, especially Winger as the number two of the operation. Meat Loaf, M. C. Gainey and Philip Seymour Hoffman have small roles as part of the crew, and do well enough, while Lolita Davidovich is a good antidote to all of the "suckers" as a local cynic just wanting to keep her crippled brother (Lukas Haas) away from anything that can grind down his spirit. Liam Neeson is sweet and swoonsome, judging by the reaction of some females, in the role of Will Braverman, the unsubtly-monikered Sheriff doing his best for the people in his town.

Leap Of Faith walks a nice path through a very grey area. It doesn't make any big assumptions about religion and people who choose to live their lives by faith, it doesn't even paint Nightengale and his crew as outright baddies. What it does is pose the interesting question: "if a fraud can make enough impact on people to create some positive change then does that mean that they're no longer a fraud, or does it even matter as long as the desired outcome is achieved?"

Jonas Nightengale admits that he's not the real deal, but he argues that he puts on a good show. A show that people can choose to pay for or not.

Leap Of Faith isn't unmissable, but it tries most of the time to put on a good show. I think it succeeds. 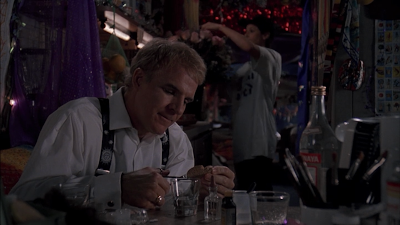