"Hello,my friends. I want to put on record that the flick out there using the word Hellraiser IS NO FUCKIN’ CHILD OF MINE! I have NOTHING to do with the fuckin’ thing. If they claim its from the mind of Clive Barker, it’s a lie. It’s not even from my butt-hole.”

That was the tweet from Clive Barker, some time ago, that gave horror fans a heads up for the latest instalment in the Hellraiser franchise. If you can somehow read that message and not figure out how Barker feels about the movie, or what he thinks the movie will offer fans, then you need to read it again, but this time with your eyes open. It's clear that the movie isn't welcomed by the man who created the original idea that would spawn a novella, a British horror movie classic, a new horror icon and much, much more.

After watching this piece of crap, I want to make it clear that it's also not welcomed by me. I'm known for my generous spirit when it comes to reviewing films. On a good day a movie like this might still be able to claw some extra points simply because the camera was pointed the right way and the actors stood where they were supposed to stand. Today is not a good day.

Hellraiser: Revelations not only fails as a horror movie, it's never scary and the gore isn't impressive, but it's also one of those rare movies that goes out of its way to insult fans. Anyone who loved any of the previous movies, even the more risible sequels, will find something to take issue with here. Ironically, anyone who does buy the DVD is in for a truly interactive experience because opening the box WILL lead to a whole lot of suffering. Even managing to run for 75 minutes, at a push, this is a trial.

The story, though I don't even care to relate it, revolves around Steven Craven (Nick Eversman) and his friend, Nico Bradley (Jay Gillespie). The two head to Mexico for some heavy drinking and even heavier debauchery and end up with a Chinese puzzle box. They then disappear. Cut to - two couples about to enjoy a meal together. They are the parents of Steven and Nico, joined at the dining table by Steven's sister, Emma (Tracey Fairaway). It's a mix of horribly unbelievable moments and bad acting until something interrupts their planned melodrama and then everything starts to get . . . . . . . . REALLY unbelievable and badly acted.

I genuinely despair for people who throw this stuff together and think that it's acceptable horror fare. The script by Gary J. Tunnicliffe is consistently awful, either laughably bad or laughably cowering in the shadow of that classic first movie that launched the series. The direction by Victor Garcia goes hand in hand with the script, helped to scrape the bottom of the barrel by the painful acting from everyone involved. Eversman and Gillespie are both bad enough, as is Fairaway, but I almost feel sorry for Stephan Smith Collins, stuck with the thankless task of portraying Pinhead (the role owned by Doug Bradley since the first film). Almost.

I try to see the silver lining in almost every situation, I really do. In fact, the fact that I don't give this the lowest score possible shows me being kind once again. Rating it as a movie that has been made, it gets a couple of points. If I rated it as a fecal-encrusted slap in the face to all fans of the Hellraiser movies, it would definitely get a zero. It should never have been made, it doesn't deserve your money and I hope those involved have the good grace to apologise and learn from their mistakes. Or, at the very least, pack their bags and live on the streets until they regain their reputations by becoming regional finalists in the underground bum fight scene. 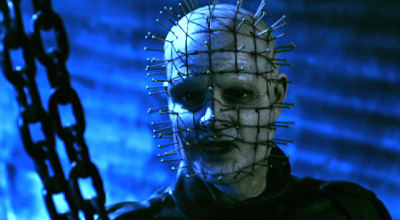