With a title like Frankenfish you can't really expect highbrow entertainment when the opening titles start up and, unsurprisingly, that's not what you get. Instead, this is a fun creature feature that suffers from budgetary limitations, but tries to make up for such shortcomings with energy and a sense of humour. It doesn't quite do enough to be a good film, but it does enough to avoid being something unwatchable.

Tory Kittles plays Sam Rivers and China Chow is Mary Callahan in this tale of a killer fish that has been causing some trouble in the bayou. Sam and Mary are sent to investigate the death of a fisherman and it quickly becomes clear that Sam is comfortable in the environment, having grown up there, while Mary certainly isn't. The locals living in the bayou are slightly worried, understandably, but they start to feel worse when it becomes obvious that the fish has returned. And it's hungry.

While it may be more Lake Placid than SyFy original (like . . . . . ummm . . . Lake Placid 2), Frankenfish can't quite do enough to make up for its many shortcomings. It tries very hard, thanks to the enjoyable assortment of characters and the flavour of the bayou being played up to distract from the variable SFX work, but there are just too many moments that serve to remind viewers that a lot of work has been done to raise this up to the level of b-movie.

Director Mark A. Z. Dippe doesn't do too bad, thanks to the script by Simon Barrett and Scott Clevenger, but I can't help thinking that more could have been done to reward the cast. Kittles and Chow are both okay, and the supporting cast includes the likes of K. D. Aubert and Donna Biscoe having fun while Reggie Lee and Mark Boone Junior do decent work with their small roles.

Not one to watch if you have a big pile of other movies to choose from, Frankenfish will help you kill 90 minutes whenever you're in the mood for a half-decent creature feature. 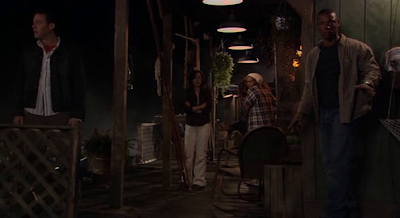