The movie that reunited director Frank Oz with star Steve Martin may not be as great as Dirty Rotten Scoundrels, but that's a tough act to follow. This isn't as sharp, it's not as smart and it's just not as funny. However, I've always found HouseSitter to be an easy movie to rewatch and enjoy. It's not without charm and there are a lot of decent one-liners sprinkled throughout the script. The biggest problem is the fact that more time is given over to other people when Martin is the best asset that the film has, a problem that would crop up more and more in the years after this film.

Martin plays Newton Davis, a man who we first see presenting a house that he's just built to his girlfriend (Becky, played by Dana Delany) and then proposing to her. It doesn't go as he'd hoped. Jump forward by some time and viewers get to see Newton plodding away at his day job, as an architect, before getting a bit too drunk one evening and having a one night stand with Gwen (Goldie Hawn). It turns out that Gwen has some issues with telling the truth. When she wakes up, alone, the next morning she remembers all that Newton said about the house he built that is now standing empty in the middle of a small, welcoming community. So she goes there, moves in and soon blurts out to the locals that she is Newton's wife. By the time Newton finds out about this whopper of a lie his parents (Donald Moffat and Julie Harris) have already warmed to Gwen, Becky is obviously regretting letting him go and the whole mess looks as if it could work out for the best, as long as the web of fiction holds together long enough.

The script and direction may both be relatively safe, but that doesn't mean that it's stale. I'm sure that some people will turn on this movie and be scrambling for the remote control within ten minutes, but I am won over as soon as the opening credits roll and I know that I'm about to spend just over 90 minutes in pleasant company.

Hawn isn't the best partner that Martin has starred alongside, but she does okay and her character is a fun one (though the movie often shies away from the obvious major, psychological problems that she has). Martin is in uptight, slightly frantic mode and reacts well to every new development that puts him on the back foot. Yet, as well as the obvious humour stemming from their situation, there is also a nice development of the relationship between the two leads, often showing their fake marriage as being not entirely dissimilar to any real one.
Delany is pretty good as the old flame who, of course, complicates the whole situation, and Moffat and Harris are both delightful as loving parents who take the news of the marriage surprisingly well, eventually.
Richard B. Shull and Laurel Cronin add to the fun during an almost farcical finale, Peter MacNicol steals every scene that he's in, playing Newton's friend and a man desperate to make his way up the corporate ladder, and Roy Cooper is also very good as the big boss man who may not realise what a talented architect Newton really is. 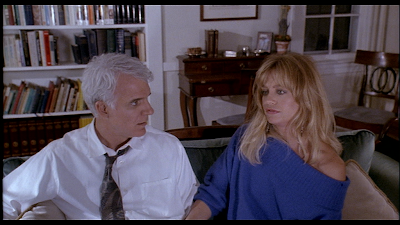