Steve Martin, Martin Short and Chevy Chase play The Three Amigos, actors who temporarily ruled the roost at the box office before being canned by an irate producer (Joe Mantegna). Martin is Lucky Day, Short is "Little" Ned Nederlander and Chase is Dusty Bottoms, but the three men have been together so long that they simply ARE The Three Amigos. When a young woman (Carmen, played by Patrice Martinez) sees them in action on the silver screen she doesn't realise that she is watching a work of fiction. Desperate to save her town from the evil clutches of El Guapo (Alfonso Arau), she writes to the amigos and asks for their help. So begins a (Western) comedy of errors, as the stars think that they are being asked to ride into town, put on a fun show, collect a nice sum of money and then leave.

Featuring three comedy stars, arguably, at the height of their cinematic fame and a director (John Landis) on a bit of a hot streak, ¡Three Amigos! mixes plenty of quotable lines with some great characters and moments of delightful absurdity. It also, of course, references plenty of classic Western tropes and moments, with the main premise sharing a lot of common ground with Seven Samurai (remade many times, most famously as The Magnificent Seven).

Martin, Short and Chase work brilliantly together, with each of their characters being a slightly different shade of stupid. And they're nicely in synch with one another, whether giving their special salute or singing "My Little Buttercup" to a saloon full of patrons. Patrice Martinez is a lovely damsel in distress, though not a completely helpess figure, Philip Gordon is amusing enough as young Rodrigo and there are small roles for Joe Mantegna, Jon Lovitz and Phil Hartman in the first act of the film. But the heroes are only able to step up to the mark if they have a good enough villain, so it's good that Alfonso Arau is very good in the role of El Guapo. He's equalled, and perhaps even slightly overshadowed at times, by Tony Plana (playing Jefe, the right hand man to El Guapo).

The script, written by Martin, Lorne Michaels and Randy Newman, may be relatively mild but the comedy is just as effective. It may feel slightly old-fashioned on many occasions - with the musical moments, selection of crowd-pleasing displays and the feeling that the movie is inseparable from the main characters in the way that both are happy to mug and dance around to be loved - but that's no bad thing when it's this entertaining. 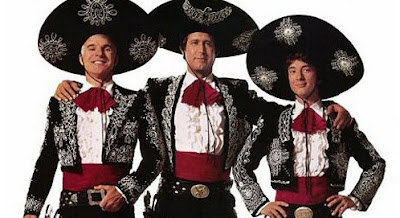