What's the plot? Well, for the most part, it concerns Chic and Ole helping a couple to fall in love, which involves helping the successful staging of a play. Except for the confusion which leads to the pair thinking they should sabotage the play, working under the misapprehension that their friend (Jeff, played by Robert Paige) should no longer be interested in the lovely Kitty Rand (Jane Frazee). Meanwhile, Betty (Martha Raye) is trying to keep the suave Pepi (Mischa Auer) in her grasp. And this is all a plot being described as a potential way to adapt the show into a film, with the main narrative bookended by scenes featuring Richard Lane as a frustrated director, and Elisha Cook Jr as the man helping him to work through the script that is describing the main body of the picture. Confused yet? It makes sense when you watch the film, in a way that is enjoyably anarchic and nonsensical.

Hellzapoppin' is another perfect film to show people who think that all "old movies" were wooden affairs, limited by the technology of the time. If you've watched the likes of The Invisible Man and Sherlock Jr then you'll already know that artists have been working magic with camera trickery ever since the infancy of cinema, but this film arguably takes that to another level. As well as the in-jokes (and there's a Citizen Kane gag that deserves a special mention), you have characters interacting with their "offscreen" counterparts, a wonderful sequence in which our comedic duo both become partially invisible, and even some jiggery-pokery (yes, that is the exact term for it) with the celluloid itself, separating our duo over and under individual frames and also turning them upside down momentarily.

Major praise deserves to go to director H. C. Potter, and writers Nat Perrin and Warren Wilson (and an uncredited Alex Gottlieb, apparently), for managing to wrangle the absurdity and rat-a-tat gags into something even remotely resembling an actual film, but they're helped along by the people who managed to create the many effects and use their technical know-how to get everything onscreen that would be done nowadays with veritable ease.

Johnson and Olson are fine in the lead roles, and they take the majority of the best gags, but Martha Raye steals many scenes as the boisterous and non-nonsense Betty and Auer is a lot of fun as Pepi. Paige and Frazee are stuck with the relatively straight roles, and both do what the roles require, Lane and Cook Jr prompt some laughs in their limited amount of time onscreen, and Hugh Herbert wanders around in a variety of silly disguises.

If you haven't seen Hellzapoppin' then you owe it to yourself to change that. And once you've seen it then you may well want to watch it again immediately. It's a film that holds up to repeat viewings, and it deserves to reach a much wider audience.

You can buy this anarchic movie here.
Americans can pick it up here.
This is a film crying out for a special edition though, shame on whichever companies are responsible for leaving it to languish without being given enough love. 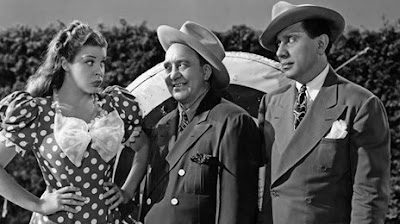