There's a small child in peril at Christmas. He has to defend his home from an invader, and has an assortment of toys and gadgetry with which to do so. Sound familiar? Yes, 36.15 Code Père Noël feels very much like a dry run for Home Alone. So much so that writer-director René Manzor tried to sue the makers of that film for plagiarism (although I don't think he moved forward successfully with his claim).

Alain Lalanne is Thomas, the young lad who ends up in his rather sprawling home with his grandfather (Louis Ducreux) and the invader, a maniac dressed up as Santa Claus (Patrick Floersheim). Fortunately, Thomas has spent a lot of time emulating heroes from his favourite action movies so he's pretty unfazed when he realises the full situation.

36.15 Code Père Noël is a very, VERY odd film, and I don't mean that as a major criticism. Manzor has crafted a strange fairytale that calls back to the grim classics (no pun intended) with children being directly threatened by the likes of murderous witches and hungry wolves, but has instead placed Santa Claus right in the middle of the proceedings. Otherwise, all of the elements are present and correct. A child living an obliviously happy life until it is rudely interrupted, an elderly loved one (the practically blind grandfather), a grand expanse of wilderness to wander around in (even if that grand expanse is all within one massive home), a morality lesson, albeit an incorrect one, and a mix of sweetness and savagery.

The clumsy nature of the script and direction actually help to create and maintain that fairytale atmosphere. Viewers aren't given any background on the characters, not really, and the editing and pacing feels very random, and sometimes almost incoherent. The script is sparse once things get moving along after the opening act, and some of the lines of dialogue uttered are enjoyably strange, but none of it matters. Even as you wonder just how much space is hidden away in the main location, as the lead child actor wanders through what appears to be a junk-strewn batcave, it doesn't matter. It all comes together to make something surreal and mildly nightmarish.

Lalanne does well in the lead role, well enough anyway, and Floersheim is a lot of fun as the dangerous Santa out to get him. Ducreux always looks suitably vulnerable, while Brigitte Fossey is the working mother who becomes increasingly concerned about the wellbeing of her son.

Frustratingly difficult to find nowadays (I was gifted a copy by someone for Christmas), this is well worth trying to hunt down, and I can only hope that it gets a decent release here in the UK one day. After hearing about it for many years, it did not disappoint, and I am sure that many other film fans would be equally impressed by it.

This looks to be a decent disc. 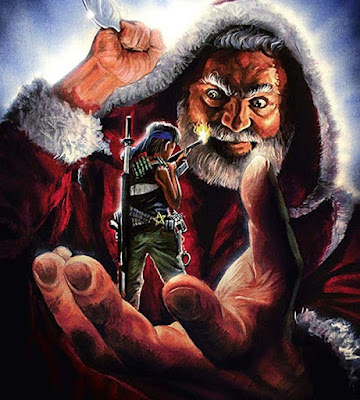