NOTE - I started to watch this on Amazon Prime, as every Wednesday is a Prime Time choice, but the audio mix was off. You could hear none of the dialogue. Worried that this was a symptom of a film made for pennies, I decided to search elsewhere for a copy of the film. I found it elsewhere online, and the audio was fine. So please be aware that the version on Amazon Prime is faulty.

Most of the time I try to watch movies without taking too much notice of the opinions of others. That way can help avoid the hyperbole, and helps to keep expectations fairly neutral. Of course, that's harder with many of the bigger cinema releases, but it's usually easier with the titles I decide to check out on Amazon Prime. Having said that, I did read a few reviews here, mainly to ensure that my next choice for a Christmas viewing would be eligible for inclusion in my yuletide schedule. The reviews weren't good. In fact, they were almost all terrible. The film was, apparently, a poorly shot bit of nastiness, without a decent script, and even lacking in any decent bloodshed. I was not about to enjoy myself, according to the advice of everyone else.

The plot is simple. Three maniacs dress up in Santa suits while on a killing spree. They target a building that has been taken over by a number of homeless people. One of those homeless people is Sam Baker (Alan Mulhall), an ex-military man who seems to be trying to redeem for something in his past, redemption that he strives for by helping a young woman named Roxy Muller (Claire Crossland). Once the sadistic Santas break into the building, they lock everyone inside and start toying with their prey.

Okay, Good Tidings has some problems. The script is the main one. Co-written by director Stuart W. Bedford, Giovanni Gentile, and Stu Jopia, it's a real mess of flat dialogue and cliches. None of the characters are sketched out well enough to have you really rooting for them, not even Sam and Roxy, and the best thing it does is opt not to give any time over to the background of the killers.

It's also a shame that a lot of the violence and death here happens offscreen. Considering that is the main strength of the film, there's nothing more to it beyond the killer Santas getting inside and terrorising and killing people, it would have been nice to see some more effective gore gags and brutality. The film makes up for that, at times, with moments showing the Santas gleefully playing games with their victims, but the general lack of tension means that fans will be waiting for one or two impressive deaths that never appear.

Having stated those criticisms, and while Good Tidings also doesn't do enough to distract viewers from the fact that it was obviously based around the opportunity to film everything in one available building, this wasn't actually that bad. I'm not going to pick apart the acting, which was often a bit wobbly but far from the worst I have seen (as well as Mulhall and Crossland, Jonny Hirst plays another main character, and he's probably the best actor onscreen), and Bedford at least tries something a bit different with his feature debut, after helming a number of shorts, to show that he might be capable of something much better, if he works with some better scripts and takes more time to consider shot choices and editing.

There are times when this feels like a stretched-out segment from an EC-comic-inspired horror anthology, especially with the accompanying soundtrack choices and the sheer glee of the killers, and that's no bad thing. It's just a shame that the film doesn't maintain that tone throughout. Still, it's one way to take a break from the usual avalanche of Hallmark holiday flicks.

It's here if you want it.
Americans can get the same disc here. 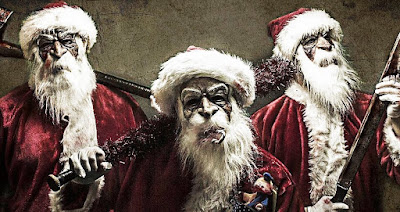