First of all, I really hope nobody picks this in the hope of seeing Angela Lansbury having fun in the role of the lesser-celebrated member of the Claus couple. That movie is Mrs. Santa Claus, a 1996 TV movie, and is very different from this (although ends up being equally "enjoyable"). Okay, maybe part of me hopes that people DO make that mistake. But here's a review anyway, for people who somehow choose to pick this while knowing what kind of slasher fare they're about to get.

Things start with a sorority house initiation ceremony that is as unpleasant and mean-spirited as those things usually are. The nastiness continues, leading to the new pledge murdering the meanest of the mean girls. Ten years later, the sister of the murder victim is in that very sorority. She is due to have some party time with friends, ignorant of the fact that someone in a bad mask is due to spoil that party with a bit of hack 'n' slash shenanigans.

Written and directed by Troy Escamilla, who previously worked with a few of the same cast members in his debut feature, which seems to have been a standard slasher movie, Mrs. Claus is, well, a standard slasher movie, although it is one that lacks any real creativity or wit, instead relying on the pacing of low-lit deaths and horrible conversations that someone must have thought were amusing and worthy of handing over to actors (a few Christmas classics are namedropped, for example, and there's an excruciating exchange about Santa possibly being high to get through his workload).

A lot of the cast members blur into one another, although some stand out (not always for the right reasons), but the two main female lead characters are played by Hailey Strader and Jantel Hope (billed as Jantel Fontenot). Hope is almost good, despite being stuck with some awful scripted moments, but Strader isn't. That keeps her more in line with Ryan Poole, Billy Brannigan, Heather Bounds, Daiane Azura, Ronni Lea, and Jace Greenwood (who is given a couple of potentially decent moments to be memorable that he does absolutely nothing with).

Fortunately, Helene Udy and Brinke Stevens are the experienced actors involved in the proceedings. Unfortunately, the lovely Ms Stevens is kind of sort of well y'know a bit not great at the actual acting lark. Don't get me wrong, I love her, as I love many of the scream queens who came to prominence in the 1980s. She just doesn't deliver anything to provide a respite from the relatively poor acting on display. Udy is a bit better, helped by the fact that she gets to have more fun with her limited screen time.

Despite the many things working against it, Mrs. Claus gains points for three things. The pacing makes things bearable, it makes some use of the trappings of the season (not as much as it could, but some is better than none), and I quite like Daiane Azura. Back off, I don't tell YOU what criteria to use when you're rating movies. It's my life.

Americans can treat themselves here. 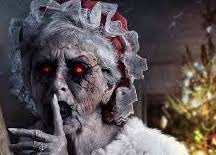