Yule Love It: The Man Who Invented Christmas (2017)

Based on a tale by Lee Standiford, The Man Who Invented Christmas shows us how Charles Dickens reinvigorated both the holiday season and his own reputation when he wrote and published A Christmas Carol.

Dan Stevens plays Dickens, who we first meet during a bit of a lean spell. He still has a good name, and fans, but he has not had a hit in some time, meaning that money is a bit tight in the Dickens household. Not that you would know that, as it continues to be spent on things that show the Dickens family to be better off than they actually are. Desperate for an injection of finances, and inspired by the influences of one or two characters around him, Dickens comes up with the idea of a Christmas tale that will save him from bankruptcy, if he gets it published in time.

Written by Susan Coyne and directed by Bharat Nalluri, this is a film that works beautifully from start to finish. The more I think about it, the more enjoyable I realise it was. It manages to paint a broad, and maybe not entirely accurate, picture of a certain time in the life of the celebrated author, yet it also manages to present the main events of A Christmas Carol in a way that is both familiar and a bit different from previous interpretations. Classic moments are presented, but they're either in the context of being imagined by Dickens as he crafts the tale, being intertwined with his own memories, or simply taking place around him, ready for his writer's mind to store them for later use. It's a great approach to the material, with the script full of many fun references and gags, and Nalluri ensuring that every scene is handsomely-mounted and up to the standards of any decent telling of the central tale.

Stevens is superb in the main role, as desperate to find the thread of his latest story as he is for an upturn in his finances, and he's surrounded by a wonderful assortment of players. Small roles for the likes of Miles Jupp (playing William Thackeray) and Bill Forsythe (a man who provides a couple of famous lines usually uttered by Scrooge) complement strong turns from Justin Edwards (as John Forster, close friend to Dickens), Jonathan Pryce (father to the author, and a man who seems incapable of managing his own finances, having previously erred so badly that it gave his son a lifetime of insecurity and fear), and Anna Murphy (Tara, a maid who provides the inspiration for the new work being a Christmas tale). Morfydd Clark (Kate Dickens), Miriam Margolyes (head housekeeper, Mrs. Fisk), and Simon Callow (as an illustrator) are also worth mentioning, as is Christopher Plummer, who lands himself the prize role of Ebenezer Scrooge, an imaginary creation who comes to life and is honed into the figure we all know during many conversations with his creator.

I wouldn't take anything here as a factual account of the life of Dickens but it provides a nice overview of the man, reinforces the impact that his classic tale had, and also proves interesting enough that those wanting to know more about Dickens will, hopefully, seek out some more material that provides more facts than fiction. This is a delightful story, pure and simple, that makes perfect use of a central figure known for giving us some delightful stories. 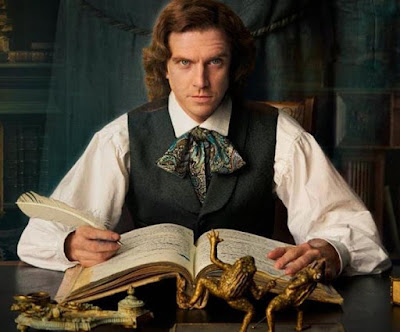