A twist on the classic Dickensian tale that features a fine British comedy creation, Blackadder's Christmas Carol is a wonderful standalone tale that features plenty of seasonal trimmings alongside the expected insults and wordplay.

I would say that even those new to the character could easily watch this and enjoy it, but it's more accurate to say that you should go into this at least knowing that Blackadder is a sneaky, self-centred, manipulator who often finds his plans undone by either his gormless assistant, Baldrick, or the actions of others around him who somehow always manage to get the upper hand. Once you know that much then you're all set.

Contrary to every other portrayal of the character, and why it is so important to know him before watching this special, things start with us being introduced to an uncharacteristically kind and pleasant Blackadder (Rowan Atkinson in what is, in my view anyway, his finest role). He intends to spend Christmas with his assistant (yes, Baldrick is still as dim-witted as ever, and played by Tony Robinson, as ever). When a spirit (Robbie Coltrane) accidentally enters his home, Blackadder asks to see visions of his past and future, leading to a revelation that turns the classic morality of the tale on its head.

Director Richard Boden had some experience of directing TV shows before this, and would go on to direct Blackadder Goes Forth, as well as many other shows afterward. He does fine here, although this is a fairly thankless task when the focus is always on the script and performances, and obviously proved himself good enough to oversee what would be the final season.

Written by Richard Curtis and Ben Elton, Blackadder easily sits higher up in the echelons of British comedy. Many people point to the final episode of Blackadder Goes Forth as one of the greatest moments in any sitcom, and rightly so, as it moved from the comedy to a poignant statement on the horror of war, and every season had many highlights (even the first season that had the main character not yet turned into the wonderful monstrosity he would become). This special episode was aired in between the third and the fourth season, which means it could easily have been a filler without as much care being given to it. Instead, Curtis and Elton clearly revel in the opportunity to rework the beloved Christmas classic, finding their way into the narrative by twisting everything to great comedic effect and then lacing each scene with the usual selection of hilarious dialogue.

Atkinson has never been better than when acting in this role (and, yes, I know that's saying something  when you think of his brilliant comedic turns), Robinson is a perfect foil to him, and the supporting cast, from Coltrane to Hugh Laurie, Vanessa Richardson to Stephen Fry, and Jim Broadbent and Miriam Margolyes, are all perfect. Many of them are reprising roles they played over the previous seasons of the show, relaxing back into them like a comfortable piece of favourite clothing.

If you have time during the holiday season, please do watch every episode ever of Blackadder. But if you can only watch one then give this a watch. It's a classic. Well, it's at least some kind of classic.

You can buy the tale here.
Americans can get the same disc here. 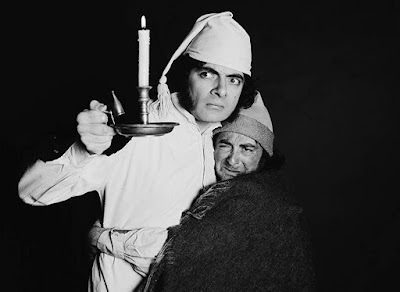