You Might Be The Killer starts off with a camp counsellor (Sam, played by Fran Kranz) escaping from a killer and hiding in a cabin. It's a standard slasher movie moment. Sam is covered in blood, he's scared, and he's miles and miles from anyone who can help him. Thankfully, he is able to phone a genre-literate friend (Chuck, played by Alyson Hannigan) who he hopes can help him get out of the situation alive. As Sam tries to remember the events that led him to this moment, filling in blank spots that he assumes stem from his recent trauma, Chuck eventually points out that a lot of the evidence would suggest that, well, he may actually be the killer. Sam doesn't seem like the killer type though, so just what HAS happened?

Now this is how you do this kind of thing. After being slightly disappointed this year by Tragedy Girls and Dead Shack, among others, I sat down to watch You Might Be The Killer with low expectations. I hadn't heard any buzz about the movie and the summary was in line with what I have just written above. Well, there should be some buzz for this one. It's a cracking little horror comedy that stuffs every scene with fun references, twists the slasher movie tropes in ways that are fun and inventive, and doesn't forget to deliver some good gore gags along the way.

Director Brett Simmons, who also co-wrote the film with Covis Berzoyne and Thomas P. Vityale (it's only the first or second feature screenplay for most of them), does a fantastic job of keeping everything feeling as if it belongs in the slasher movie subgenera, even as things start to twist and turn. Having previously let me down with Husk (a scarecrow horror movie that some others may enjoy more than I did), Simmons isn't someone I had on my radar to keep an eye on, career-wise, but I'll certainly be looking forward to whatever he does after this.

It helps that I quite like both Kranz and Hannigan, and I appreciate that not everyone will. They both do well here, with the former a bag of tension and nervous energy (even in the flashbacks to pre-massacre scenes) and the latter amusingly unflappable throughout while offering advice on the phone during her work shift. Brittany S. Hall, Jenna Harvey, and Bryan Price are also very good, playing three of the more memorable camp counsellors who may or may not survive to the end credits.

If you're like me, someone who likes both the leads and doesn't mind meta humour, then it's hard to see you not enjoying this. The bodycount being shown onscreen may seem like one unnecessary, cutesy, detail too much, but it's not just a gag, it's a smart way to immediately let viewers know when things are happening, given the playful, non-chronological structure of the screenplay.

Pair this up with The Final Girls and you have a very entertaining double feature. Enjoy.

Anyone who enjoys this should also pick up this movie.
Americans can pick up another meta slasher here. 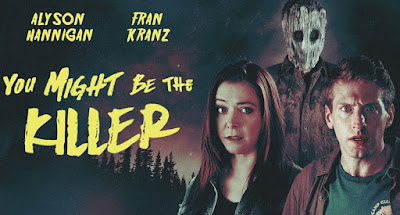