Another movie from Lars von Trier, another expected cloud of controversy and divided opinions. My own relationship with the man has turned around completely from how it used to be. I loved both Dancer In The Dark and Dogville but have strongly disliked most of his output over the past decade. Yet, to his credit, I still end up keen to see what he will present to us next. And I still enjoy hearing about how his work tends to upset people.

The House That Jack Built stars Matt Dillon as Jack, a serial killer who is relating the story of his "highlights" to a figure named Verge AKA Virgil (Bruno Ganz). Jack is supposed to be smart enough to have been killing people for a number of years, despite being unable to behave normally in most situations that place him anywhere near other witnesses, but he also wants to be caught. It's just a matter of time, which may mean that Jack doesn't ever get to finish building a house he has attempted on a few different occasions.

The first thing that struck me about this movie, after all that I'd heard about it, is how funny it was. This is Von Trier having more fun than he's had in some time. Oh, he's always had dark humour running through his material but this brings it right to the surface and is all the better for it. If you're worried about this being a bleak serial killer movie then the opening scenes should allay those reservations (although there are moments of violence that are quite brutal).

The second thing that struck me was how unfortunately hampered Dillon was in the main role. I really like Dillon in most of the roles he has played throughout his career, and this could have been a stellar turn from him, but he's not that good here. It's not entirely his fault. Von Trier has written a script, working with Jenie Hallund once again, that crucially can't decide on how it wants to portray the central character. If he's precise and smart then that isn't evidenced by the scenes we are shown. If he's just an ordinary guy who has remarkable luck in his chosen way of life then let us see some more everyday moments. Putting Dillon in the lead role and then not allowing him to use his talents to portray someone who could possibly be a much more effective charmer and killer is a huge flaw.

A lot of the other aspects of the film work, although we have the usual excesses and moments of self-indulgence from a director now so far up his own backside that he's probably created a whole universe in there, complete with planets populated by people who worship him. The runtime is about 150 minutes, there are tableaux moments, and some more unnecessary slow motion that I, once again, have to cede looks great but would be ridiculed if this was a film from certain other directors who have been known to overuse that trick.

Although this is really all about Dillon's character, decent supporting turns come from Uma Thurman,  Siobhan Fallon Hogan, Sofie Gråbøl, and Riley Keough. None of them are onscreen long enough, especially Hogan or Keough, but they all do well to make a lasting impression long after the film is finished,

If you want a gritty serial killer movie then you have to look elsewhere. You can also look elsewhere if you want some black comedy with your multiple murders. But this is the only place where you can find the two colliding with the artistic sensibilities of Mr Lars von Trier. That will be enough to ensure that some people never watch it. I'm actually pleased that I decided to give it a go.

You can buy Jack's house here.
Americans can rent it here. 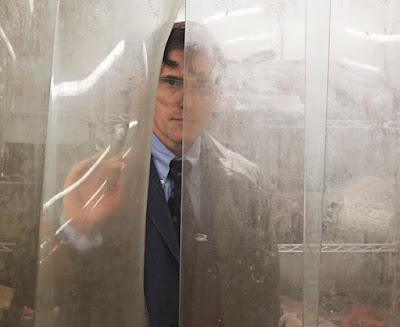