Okay, it’s been a while since I’ve seen Pride & Prejudice but I am pretty sure that this Christmas TV movie, based on a book by Melissa de la Cruz, has very little to do with it. Oh, there’s a name or two used, and you could say that there are thematic similarities in between the Christmas songs and decorations, but anyone hoping for a modern, tinsel-covered, riff on the work of Jane Austen should not be counting on this.

Lacey Chabert plays Darcy Fitzwilliam (Darcy . . . get it?), a young woman who prides herself on being good at her job, helping people invest and reap great rewards, without leaving out smaller investors. When she heads home for the holidays, she ends up helping her mother (Sherry Miller) get things organised for a charity auction that all needs to run smoothly. Darcy ends up being pushed into working alongside Luke (Brendan Penny), a man she has known since her schooldays, and someone she doesn’t always get along with. Which means the potential for romance is obviously soon in the air. But Darcy’s ex, Carl (played by Morgan David Jones), obviously still has a thing for her. And there's some scheming going on at her workplace while she is absent.

I'm not going to pretend that I was keen to see this because I have an overwhelming love of Jane Austen works, so the fact that this didn't really seem to do enough to warrant the cutesy title didn't bother me too much. I also wasn't aware of director Don McBrearty or writer Nina Weinman before this (which isn't to say that I haven't come across their work before now, McBrearty has three Christmas movies churned out THIS YEAR and Weinman has a solid-looking CV in this arena).

I watched this for one reason, and one reason only. Lacey Chabert. She's someone I have always found to be a likeable presence onscreen and her ubiquitousness throughout the festive period has become, for me, one of the staples of the season. She does well with material that, as we all know, often doesn't have too much to differentiate it from fifty other movies you could watch in the weeks leading up to Christmas Day. Penny doesn't do that bad either, while Miller and Art Hindle (who has a couple of scenes playing the father of Chabert's character) are both enjoyable enough. It's a shame that the script couldn't have done more with Jones, however, as he just pops up now and again to act like a complication when he's actually not. He's just an unnecessary presence. But make him a more desperate figure, have him scheming and twirling a fake moustache, and you could maybe have turned this whole movie into something much more enjoyable.

Once again with this type of thing, those who know what they are getting will get what they're after, to a degree. Trees, snow, Christmas tunes, Lacey Chabert. It just doesn't have any moments that are good enough to raise it up, despite all being as slick and fairly well-paced as however many other choices Hallmark will be giving us this year.

Look at THIS set, you know you want it.
Americans may want this triple-bill. 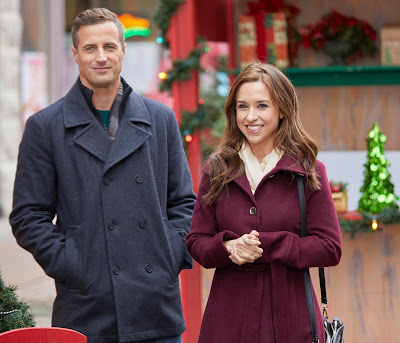